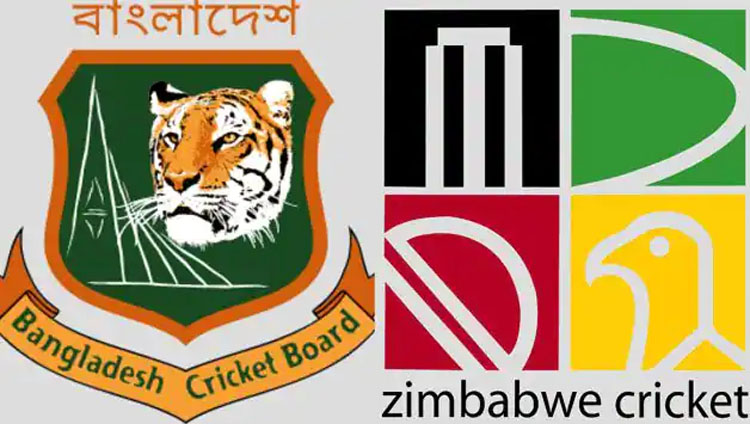 A determined Bangladesh will take on Zimbabwe for the solitary Test of the tour tomorrow (Wednesday) in a bid to prove that their recent absolute dominance over the Southern African nation is not a fluke at all.

The match which will be held at the Harare Sports Club will start at 1.30 PM as per Bangladesh Standard Time (BST).

Even though Bangladesh remained vulnerable in the longer format even after 21 years of their elevation to this elite format, they of late flexed their muscle over Zimbabwe to keep them down always.

Overall Bangladesh played 17 Tests against Zimbabwe, won seven-- six of which came on some soil. Five victories came after 2013 and the first one was in 2005 when actually Bangladesh won their maiden Test. Bangladesh’s only victory against Zimbabwe at Zimbabwe’s soil came in 2013, when they visited the country last. But the two-match Test series ended in a 1-1 draw as Bangladesh were dubbed favourites.

Zimbabwe also won seven Tests against Bangladesh and five of them came at their own den. They only won two Tests at Bangladesh’s soil in 2001 and 2018. The rest of the three Test matches between the two sides ended in a draw.

Stat basically showed the two sides in the same vain but it is Bangladesh who should have the edge, considering that the Southern African nation was not playing Test cricket regularly since 2011.

Zimbabwe came back from the five years of self exile of Test cricket in 2011 and since then played just 31 Tests. Bangladesh, in between, played 55 Test matches.

But Bangladesh had nothing to be proud of in the longer version format in which they time and again proved them extremely vulnerable. Since their elevation to this format, they so far played 123 Tests, won just 14 and lost a staggering number of 92 Tests of which 43 defeats was by innings margin. The rest of the 17 Tests, including the last Test, were drawn.

So the interesting fact is that half of Bangladesh's victory came against Zimbabwe. But the real test for Bangladesh, popularly called as Tigers begins tomorrow.

Zimbabwe though are considered as stronger team at their own backyard, it is high time for Bangladesh to show their Test credentials since they have the absolute dominance over Zimbabwe and experience behind them.

Even though Bangladesh lacked longer version match practice because of playing Bangabandhu Dhaka Premier League (DPL) in T20 format ahead of coming here, most of their batsmen and bowler hit the form in the two-day warm-up game against Zimbabwe Select XI, which was bolstered with some of the national players.

With both batting and bowling, Bangladesh left the local side in a cornered position with the team’s best player Shakib Al Hasan leading from the front. Ending his patchy batting form, Shakib cracked 56 ball-71 before taking three wickets with bowling. Other batsmen and the bowlers also did well.

Bangladesh, however, would have to sweat on the fitness of Tamim Iqbal and Mushfiqur Rahim, nursing with knee and finger injury respectively.

Domingo also emphasized on to be patient and keep the pressure for longer time in a bid to dominate Zimbabwe in the one-off Test.

“I think when playing in Harare, patience is very important with bat and ball,” Domingo said.

“We’ve to be patient, disciplined and hold on to the chances which might not come around often. When they do come, we have to be mentally ready to take those chances,” Domingo added.