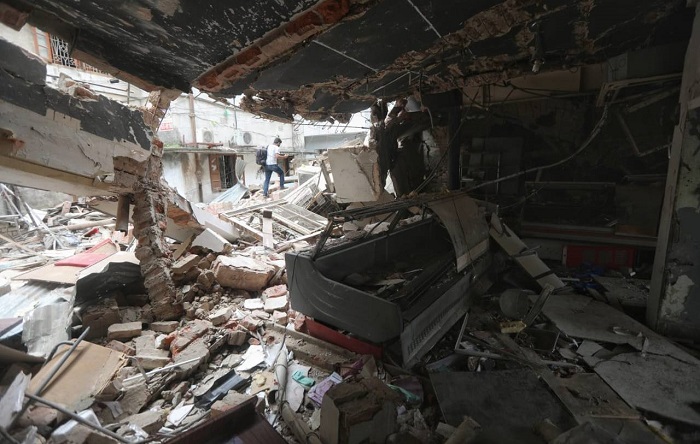 Probe panels looking into the Moghbazar explosion are still in dark about the exact reason behind and the origin of the blast although eight days have elapsed since the incident.

A massive explosion took place in a three-storey commercial building, ‘Rakhi Neer’, at Outer Circular Road at Boro Moghbazar in the capital around 7:30pm on June 27, leaving at least 11 people dead and 50 others injured.

After the incident, about five committees were constituted by different organisations to investigate the incident.

The committees were given seven days each to submit their findings to their higher authorities, but they could not complete their investigation.

A sub-inspector of Ramna Police Station filed a case over the incident on June 29, but they could not bring forth any progress and so, the case was transferred to the Counter Terrorism and Transnational Crime (CTTC) unit of Dhaka Metropolitan Police (DMP) on July 3.

Meanwhile, no compensation has yet been provided for the injured and families of the deceased.

One of the probe bodies has found that the building, ‘Rakhi Neer’, was built violating the original design. A gas pipe line was detected under the building.

Mohammad Jubayer, general secretary of Moghbazar Plaza Traders’ Association, told the Daily Sun that Mohammad Khokon is the owner of ‘Rakhi Neer’, which was very old.

Shahnewaz Parvez, general manager (Contract) of Bangladesh Oil, Gas and Mineral Corporation (Petrobangla), who is the head of the investigation committee formed by Petrobangla, told the Daily Sun that ‘Rakhi Neer’ was constructed grabbing 14 feet from the its design in the front.

He said a gas line was located under the building.

Shahnewaz said they were trying to know whether the line is legal or illegal. “We’ll decide about the reason of the explosion later,” he said.

Brigadier General (retd) Ali Ahmed Khan, former director general of Fire Service and Civil Defence (FSCD) and adviser of Safety Management Foundation, told the Daily Sun on Monday that they inspected the spot and suspected that there was an old gas line of Titas Gas underneath the building for which the explosion took place.

“There’s a gas line on the ground floor of the building. Titas Gas Transmission and Distribution Company Ltd is not admitting the fact. When I was director general of the FSCD, firefighters detected gas lines from spots of about 14-15 incidents. But the Titas Gas didn’t admit their faults,” he said.

Ali Ahmed said, “There’re lots of old and illegal gas connections in the country. But the Titas Gas hardly looks into the matter. We don’t know when such incidents occur again,” he said.

He added that a leaked gas line was found adjacent to ‘Rakhi Neer’ on Sunday and gas was found emerging from the line.

Talking about the line, he said it was in the road in front of the building.

Shabiul said workers of WASA dug out the road for repairs. “We suspect the line was leaked at the time of digging or explosion in ‘Rakhi Neer’.”

He denied the existence of any gas line in the building.

Contacted, Dinmoni Sharma, deputy director (Dhaka Division) of the FSCD, told the Daily Sun that they suspect the explosion happened due to the accumulated gas from a line in the building.

About investigation, he said it will take some more days to complete it as they could not contact many government offices due to their closure amid the countrywide lockdown.

Engineer Abul Kalam Azad, chief inspector of the Department of Explosives, told the Daily Sun that they could not end the investigation. “It’ll take some more days,” he said.

CTTC chief Md Asaduzzaman said the explosion might have taken place from the gas leak, but could not locate the exact origin.

He said they were investigating everything.