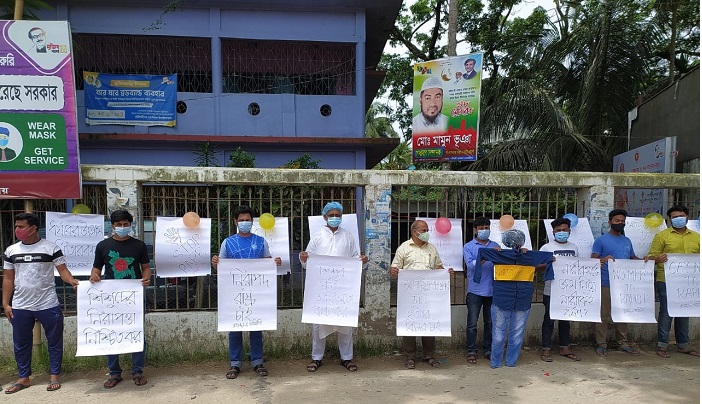 Raktadan Samity, a voluntary social organisation, on Monday organised a symbolic human chain in protest of the gang rape and murder of Sadia Akhter Tuni, a third grader in Kishoreganj's Katiadi.

Participants demanded immediate arrest of the rapists, who killed Tuni, and exemplary punishment under the Speedy Trial Act in the symbolic human chain formed in front of the Katiadi Upazila Parishad.

Badrul Alam Nayeem, founder and coordinator of the Raktadan Samity, said Tuni, a class three student, was brutally murdered after being gang-raped. We demand immediate arrest of the killers and exemplary punishment under the Speedy Trial Act.

“We have organised a symbolic human chain as there are restrictions to break the chain of coronavirus transmission.”

It may be mentioned that on July 2 Sadia Akhter Tuni went missing while returning home alone from the adjacent Old Brahmaputra River after fishing with her father in Dokkhin Lohajuri village of Lohajuri union of the upazila. Police later recovered her body from a jute field with her hands and feet tied and a scarf wrapped around her neck on the same day.