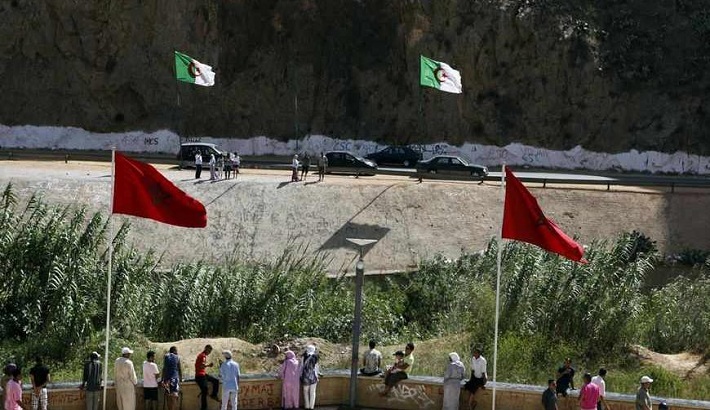 In our series of letters from African journalists, Algerian-Canadian journalist Maher Mezahi questions why the border between Algeria and Morocco has been closed for so many years.

The main crossing between Morocco and Algeria is called Zouj Beghal, which translates as "Two Donkeys".

Legend has it that a pair of donkeys were harnessed to a yoke in Morocco and ordered to march eastwards until they effectively traced what would end up being the borders that delineate Morocco and Algeria.

On a continent where the majority of our borders are arbitrary, I never doubted the veracity of the myth.

Naturally, the border that spans nearly 2,000km, has been a source of tension for both countries since independence, starting with the 1963 Sand War over Morocco's claim to territory in Algeria.

The two countries fell out again when Algeria backed the Polisario Front's campaign for Western Sahara's independence from Morocco, leading to the 1975-1991 Western Sahara War.

The full details of the relationship between the two North African nations are awfully tedious and impossibly complex but I want to express frustration on behalf of my generation with the closing of the border.

As an Algerian who grew up in the diaspora, I quickly learned that very little separates the two people.

Abroad, we pray in the same mosques, lend a helping hand at weddings and fiercely compete in football with one another.

In terms of customs, culture and language, western Algerians have much more in common with Moroccans than they do with Algerians on the other side of the country.

No-one understands that more than the communities that live along the donkey border and who crossed clandestinely for decades on end.

This year, however, there has been a shift in tone.

In March, a community of date farmers from Figuig, Morocco, who cultivated a grove in El Arja, Algeria, were told by the Algerian authorities that they would no longer be able to do so.

Some of the Moroccan families claim to be in possession of paperwork that proves the land belonged to their families in the early 20th Century, prior to the decolonisation process.

Nevertheless, the United Nations-ratified border was strictly enforced by the Algerian government, which cited drug smuggling as the reason for the eviction of the date farmers.

For many families in Figuig, agriculture is their sole means of subsistence and the closing of the border may ring a death knell for economic prosperity in the region.

The tensions arose just weeks after legislation was proposed in Morocco to legalise cannabis for medical, cosmetic and industrial purposes.

The Algerian army then raised concern about the influx of drugs from Morocco, claiming it had seized about 200 tonnes of hashish and 6.3m psychotropic pills since 2018.

"The Moroccan regime uses all means to sell its drugs outside its borders, ignoring the security and stability of neighbouring countries," it alleged in a statement.

In June, Algeria's President Abdelmadjid Tebboune ruled out the possibility of the border reopening, saying: "We cannot open borders with a country that attacks us on a daily basis."

He did not elaborate, but the two governments often attack each other through their media.

The story about Figuig hit me because I distinctly remember it capturing my imagination on a stunning train trek from Oran to Bechar a few years ago.

After falling asleep on the verdant, rugged Mediterranean coast, I woke up the next morning in the Sahara desert at the Figuig-Beni Ounif crossing.

It felt surreal looking a few hundred metres out of the caboose and seeing Moroccan gendarmes and border patrols.

My peers have never experienced crossing the land border and very few have hope that the situation will change any time soon.

General resignation prevails that the two governments are unable and unwilling to dialogue, compromise and - sometimes - even respect international law.

The stubbornness is particularly painful when compared to the success of regional economic blocs elsewhere in Africa such as the East African Community.

The bloc, which consists of Mauritania, Morocco, Algeria, Tunisia and Libya, could have been one of the continent's and region's superpowers.

Experts place the yearly financial losses of the border closing at billions of dollars across North Africa.

Ambitious infrastructure projects such as the Trans-Maghreb highway, which would link 55 cities, 50 million people and 22 airports from Nouakchott to Tripoli, also seem dead in the water.

In the era of multiple nations hosting international sporting events, I dream of a Maghreb bid for Africa's second World Cup.

Yet the dream will remain just that so long as the two governments in Morocco and Algeria do not change their ways.

For the dreamers of our generation, we will have to settle on saving up for costly flights if we ever want to visit one another's countries.

But if the borders do open up in my lifetime, I will make sure to cross at Zouj Beghal and find out what in the world those donkeys were thinking.