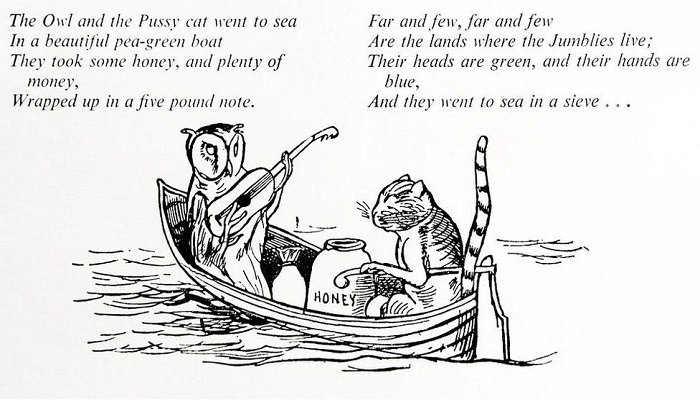 Previously unseen poems and letters written by Victorian nonsense poet Edward Lear have been found hidden in a private collection.

The discovery was made by University of Nottingham PhD student Amy Wilcockson in the British Library.

While sifting through manuscripts, Ms Wilcockson noticed some pages written by Lear to a young English woman he had befriended in Italy.

The university said the finds were significant.

Ms Wilcockson found the pages, which contain a limerick about an old man on a bicycle, a poem and several letters, in a large collection of manuscripts known as the Charnwood Autograph Collection.

They were written by the poet - best known as the author of The Owl and The Pussycat - to Mary Mundella, the daughter of a Nottingham hosiery merchant.

Mary passed the correspondence down to her niece, Lady Dorothea Charnwood.

Ms Wilcockson said: "I was flicking through, when I came across a poem, 'The Last of the Octopods'.

"I read the poem and laughed out loud; it was humorous and nonsensical.

"Imagine my joy when I read the signature of the poem's author."

After some research it became clear the pages were unpublished and unseen by the public, and Ms Wilcockson said she realised she had "something special" on her hands.

"I think this is a really major find for 19th century literary studies, and it deserves a wider public audience too," she added.

The discoveries have now been digitised by the British Library.