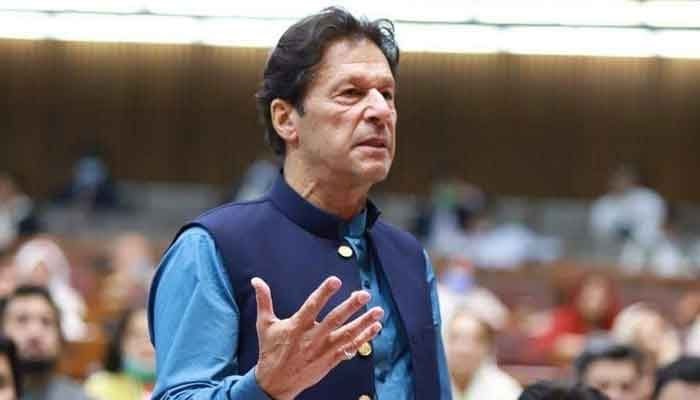 The prime minister has dominated the media not only in Pakistan but around the globe for some controversial remarks recently. The coverage provoked a widespread reaction from his critics, supporters, sympathisers and voters alike.

In largely equal proportion, praise and sharp rebuke surrounded a set of few assertions of the PM like women rape vs veil; no talks with India; "absolutely no" to America on basing; and blunting IMF among others.

But is he blustering? Is he doing everything that can secure him a political milestone, for example, winning elections of AJK? Or he seeks to affect serious policy outcomes? Here lies the answer.

The PM was under fire effectively in the entire West and Pakistan for his views on the rape issue as his interview – with the US journalist Jonathan Swan of HBO Channel – made sensational headlines in the US and EU's major media outlets depicting his contention (i.e permissive cloths of women inviting men's sexual proclivity "unless they are robots" hence women need parda – veil) as conservative and at odds with feminist and more liberal views prevalent in these countries.

Social media also was charged with so much criticism of the prime minister. Diving into the debate, many sections expressed opinions as to what is parda and what not: some even become self-appointed scholars and tried to expand the ambit of the veil: "Parda is not clothing only. It should be of yours eyes, your soul, yours temptations. That's the definition of parda for me", said an observer. Ironically, he is least bothered about how this statement was problematic on many levels as there is no data available to support this assertion nor it can be termed as a stand-alone rational opinion carrying some authority.

The second contention was his absolute rejection of any possibility of talks with India. He claimed that he would like to see Article 370 reversed. What is odd is he seems to have infringed on the edges of the strategic domain – already being looked after by the establishment which is pursuing a backchannel i.e Track 2 and may result in some deliverables: a) probably as an implicit acknowledgment, India held Delhi APC (presided by PM Modi drawing in all major politicians from IOK) b) it was in large part a signal to Pakistan that Delhi has intent to restore statehood in IOK – a hint of a thaw in itself and c) the earlier convergence was on LoC.

No facilitation with the USA was another controversial statement when he said “absolutely not’’ in an interview with the US-based Channel responding to the query on Washington’s request for bases in Pakistan. However, the fact is that America has least interest in old-style bases when they have ‘’on the horizon’’ military assets’ across the region i.e. the Indian Ocean, and only sought renewal of flight rights which are already in place as per 2001 protocol (referred to as ALOC and GLOC) expiring on June 30, 2021. So he was by all probability covering for the above when he said “absolutely no’’ to the basing option. But he was applauded by his supporters and other nationalist-neutral Pakistanis.

Blunting IMF was the gist of what he wanted as a message to masses reported by Finance Minister Shaukat Tareen on the floor of the assembly. He praised the PM saying that “Imran Khan is standing in front of the IMF”. Was he not the same PM who bowed to the IMF for 36 months? When October comes, he will likely bow again when his team renegotiates with the IMF accepting their parameters with a few tweaking here and there of the original IMF programme.

That soft power does not come from speaking the English language is another intellectual position, the PM unveiled in a speech. As English has become the lingua franca – from the streets of Paris to the rising economic power of China English is being adopted widely – around the world (where almost a trillion dollars is dedicated to R&D conducted in the English language). So English language skill has extra leverage to attract trade and investment opportunities and citizens have access to the latest research world over. The flip side of the PM’s plea against English is a default attempt to create a two-tier system in the country.

Meanwhile, some of his propositions embroil the establishment, depicting it in a very bad light and may even hamstring pragmatic strategic choices: For example,

PM’s populist narratives for the first time encroach the edge of the strategic domain of the estb. His “absolutely no’ CIA basing rhetoric” (in US Channel interview) is getting favourable traction with public opinion-making it harder for any pragmatic decision by the estb on strategic issues which demand cold, calculated and cunning thinking to get a geopolitical advantage.

For some, it is reminiscent of “Dawn leaks” unfolding with the only difference, Imran Khan is taking the position of Nawaz Sharif vs the estb, but the estb remains in the dock in the perception domain here again?

Also over the horizon fast-evolving political changes in IOK by India, needs subtle handling in the narrative domain – another critical issue already monopolised by the PM’s populist stance. Without a push back, such pronouncements will likely invoke anger against the estb if any decision is made contrary to the PM’s public stance, though.

Nevertheless, they come against the backdrop of his critics demanding political correctness from the PM. However – after his interview with the US Channel – they forget that there is a method in the madness: his narratives are deliberate and serve several objectives: a) they are a great distraction from the real issues affecting his government – In other words, the PM wants to push the media spotlight towards another direction instead of focusing on his government’s serious challenges or failings–b) his stances are to keep him in news cycles for other than necessary focus: censure for misgovernance so by extension he preempts draining his political capital and c) another benefit for PM is his narratives (on foreign policy, strategic issues, accountability, and rape vs women dress, and IMF) is well received by his base, by far the most important constituency, he aims at when he speaks.

Any impression that potential harm to country i.e. it’s soft power, damage in terms of portraying it as a regressive state or infringement on relations with other friendly nations or communities is certainly beyond any politician’s cost and benefit calculus and is equally a moot point for PM Imran Khan.

In the political world, having a narrative and sticking to it is like having an ideology, a creed to raise support, grab power and maintain influence.

Couched in morality-good or evil-crystallised in a cause or mission, the narratives serve as a divine pull for masses and followers to stick around a leader. Marxism, Naziism, democracy/plutocracy etc were all once great narratives weaponised by politicians to grab power and on whose name caused huge destruction and suffering of humanity in the annals of history.

Other populist leaders from the global – former President Trump, Prime Minister Boris Johnson to PM Modi – share the same toolbox: playing on anything and everything to appease their vote base encompassing all inconsistent and irrational positions on critical issues, e.g., immigration, race relations, Muslims/Islamophobia, minorities, and women issues (i.e in case of PM Khan). After all, offering simple solutions to more complex problems help populist leaders to get votes and hence grab power.

The main structural problem with the current Westminster political system is gridlock and has failed to effectively make decisions and ensure efficiency (i.e from the UK to France to America) Hence, is steadily on the march to create extreme rightwing politically disposed outcomes – the culmination of extremely flawed political narratives and by extension populist leaders winning elections. So is Imran Khan who is wise up to cash in on vulnerabilities and constraints of our version of Westminster democracy.

Against this bigger and wider picture, social and political sermons of the PM, instead of rationalised public policy discourses, ride roughshod over the need of formulating effective policymaking on issues from foreign, strategic policies to child sexuality and rape.

After all, any strategy based on populist views of the PM – diverse from authentic data and real policy-making processes particularly on social issues – will have dire consequences for the statecraft. But if his critics are right, after the AJK elections he may reverse some of his positions: he will likely bow to the IMF, concede to Washington on some version of cooperation on US’s counter-terrorism requirements post-Afghanistan pull-out, and may even engage India.

Thus for the PM the narratives are cost free and not necessarily matching any intent of execution. So, expect them to be easily reversible as and when convenient, regardless of any possible subset loss(s) to the country.

Jan Achakzai is a geopolitical analyst, a politician from Balochistan and ex-adviser to the Balochistan Government on media and strategic communication. He remained associated with BBC World Service. He is also Chairman of Institute of New Horizons (INH) & Balochistan.