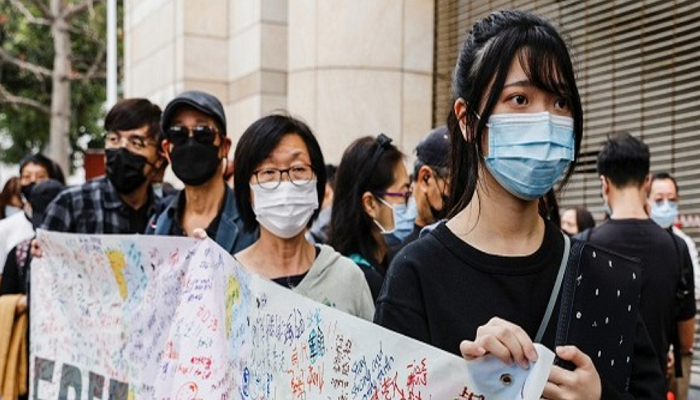 As Hong Kong observed the 24th anniversary of its return to China, police say that they have arrested 19 people suspected of desecrating China’s national flag and holding placards that incite secession.

The draconian Beijing-imposed national security law, which completed one year on June 30, criminalises any act of secession (breaking away from China), subversion (undermining the power or authority of the central government), terrorism and collusion with foreign forces, with punishments of up to life in prison.

Protest marches were banned this year as they were a year ago. Before the ban, tens of thousands of people rallied on the anniversary every year since 2003, NHK World reports.

Local media report that 10,000 police officers were mobilized and a park in central Hong Kong was closed to the public. The officers stopped people who shouted or paused on the streets to inspect their belongings.

NHK World reported that a man stabbed a police officer in the back in a downtown area on Hong Kong Island late on Thursday night. The officer was seriously injured.

Police say the man stabbed himself in the chest on the spot and later died at a hospital.
Though Chinese and Hong Kong leaders assured the public that the security law would target a minority of individuals and not diminish freedoms in the semi-autonomous city, at least 117 people have been arrested and 64 charged as of June 27.

As soon as the bill was introduced, people had voiced alarm that the law could be used to stifle dissent. many feel that their worst fears have been confirmed as China has tightened its grip on Hong Kong and subjected the city to its strict laws and censorship.

One year after the law, Hong Kong looks very different from the rebellious city of protest it had been for decades. With Hong Kong increasingly being brought under Chinese rule, many local residents are looking overseas.

As China celebrated the 100th founding anniversary of the Chinese Communist Party, many sites, including Tiananmen Square, were closed to the public.

Meanwhile, Hong Kong-based pro-democracy activist and human rights lawyer was arrested for the second time in less than a month, reported an American broadcaster.

Chow Hang Tung, a vice-chair for the non-profit Hong Kong Alliance, was arrested on Wednesday for inciting illegal assembly, which was scheduled to take place July 1. She was also arrested June 4 for the same charge, Voice of America reported quoting Richard Tsoi, the group’s secretary-general.