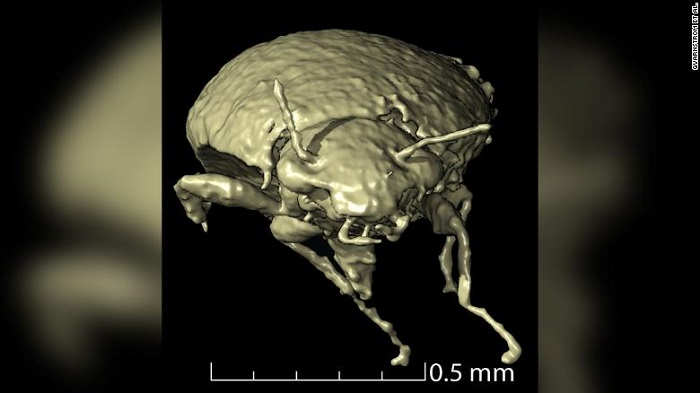 You might think fossilized feces are only full of crap, but new research on one specimen has turned up a hidden treasure: a 230-million-year-old, previously undiscovered beetle species.

Named Triamyxa coprolithica, the tiny beetles are also the first insects to be described from fossilized feces -- or coprolites -- and were visible by a scanning method that uses strong X-ray beams, according to a study published Wednesday in the journal Current Biology. Besides the discovery of the beetles in a coprolite, the scientific name also refers to the Triassic period, which lasted from roughly 252 million to 201 million years ago, and the suborder of bugs called Myxophaga -- small aquatic or semiaquatic beetles that eat algae.

"Insect fossils of this type, preserved in three-dimensions like this, are practically unheard of from the Triassic, so this discovery is very important," said Sam Heads, the director and chief curator of the PRI Center for Paleontology at the University of Illinois at Urbana-Champaign, via email. Heads wasn't involved in the study. 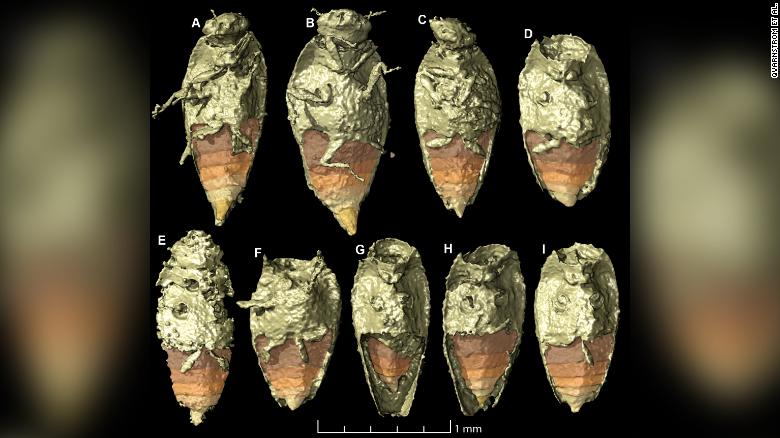 "I was really amazed to see how well preserved the beetles were, when you modeled them up on the screen, it was like they were looking right at you," said the study's first author Martin Qvarnström, a paleontologist and postdoctoral fellow at Uppsala University, Sweden, in a statement. "This is facilitated by coprolites' calcium phosphatic composition. This together with early mineralization by bacteria likely helped to preserve these delicate fossils."

Calcium phosphate is critical for bone formation and maintenance, and mineralization is when organic compounds are converted into inorganic compounds during decomposition processes.
Based on the size, shape and other anatomical features of fossilized droppings analyzed in prior research by the authors of the current study, the scientists concluded the coprolites were excreted by Silesaurus opolensis, a small dinosaur roughly 2 meters (6.6 feet) long that weighed around 15 kilograms (33.1 pounds) and lived in Poland around 230 million years ago during the Triassic age.

"Silesaurus possessed a beak at the tip of its jaws that could have been used to root in the litter and perhaps peck insects off the ground, somewhat like modern birds," according to a news release.

"Although Silesaurus appears to have ingested numerous individuals of Triamyxa coprolithica, the beetle was likely too small to have been the only targeted prey," Qvarnström said. "Instead, Triamyxa likely shared its habitat with larger beetles, which are represented by disarticulated remains in the coprolites, and other prey, which never ended up in the coprolites in a recognizable shape. So it seems likely that Silesaurus was omnivorous, and that a part of its diet was comprised of insects."


There isn't "enough evidence at this point to say for certain whether or not Silesaurus was specifically selecting these beetles," Heads said.

"It is possible that it was a generalist insectivore snatching up whatever insects it could catch and that the beetles were the only ones that survived digestion owing to their (very hard and) robust exoskeletons," Heads added. "Their small size would certainly have helped some of them remain intact since they stood a greater chance of being swallowed whole and not getting chewed up."
One other suggestion the researchers made, based on their findings, is that coprolites could be an alternative to another material known for producing the most well-preserved insect fossils: amber, the hard, yellowish yet translucent fossilized resin produced by extinct trees of the Tertiary period, which lasted from roughly 66 million to 2.6 million years ago.

"I have worked on fossil insects preserved in amber for many years and agree with the authors that the level of preservation seen in the coprolite specimens is very similar in terms of both completeness and level of preservation," Heads said. "It's really quite remarkable."

Since the oldest fossils from amber are about 140 million years old, the much older coprolites could help researchers venture further into the unexplored past, according to a news release.

"We didn't know how insects looked in the Triassic period and now we have the chance," said study coauthor Martin Fikáček, an entomologist at National Sun Yat-sen University in Taiwan, in a statement. "Maybe, when many more coprolites are analyzed, we will find that some groups of reptiles produced coprolites that are not really useful, while others have coprolites full of nicely preserved insects that we can study. We simply need to start looking inside coprolites to get at least some idea."

Researchers who find coprolite insects can scan them in the same ways scientists scan amber insects, Fikáček added, which would reveal minute details. "In that aspect, our discovery is very promising, it basically tells people: 'Hey, check more coprolites using microCT, there is a good chance to find insects in it, and if you find it, it can be really nicely preserved.'"