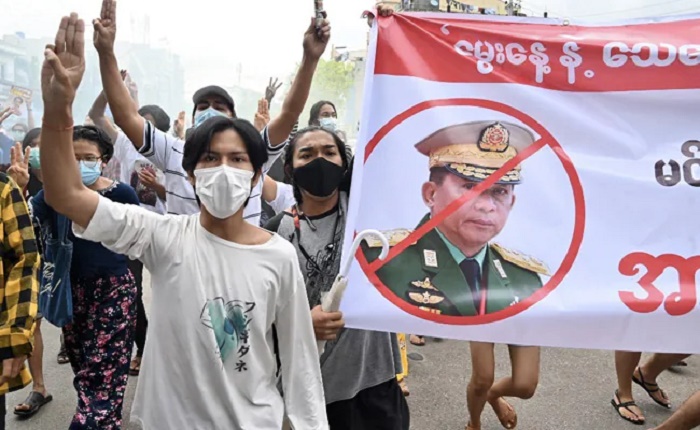 The nation has experienced mass protests and a brutal military response since the February 1 coup which ousted civilian leader Aung San Suu Kyi.

Almost 890 civilians have died in a crackdown by the State Administration Council -- as the junta calls itself -- and almost 6,500 have been arrested, according to a local monitoring group.

On Saturday, anti-coup demonstrators posted pictures on social media of a traditional noodle soup dish called mohinga, which is often served at funerals in Myanmar.

"I made (mohinga) on his birthday because I want him to die soon," one Yangon resident told AFP.

"Many innocent people lost their lives because of him. So, if he died, the whole country would be happy."

In Mandalay, the country's second-largest city, some activists burnt pictures of the junta leader and set fire to fake coffins at mock funerals.

"Because of this man, our Myanmar has many problems," a Mandalay resident told AFP.

"He actually should not have been born. Therefore, we hold his funeral as we want to say he should be dead."

Min Aung Hlaing turns 65 Saturday -- the age he would have been subject to mandatory retirement while he headed up the armed forces, as stipulated by the country's 2008 constitution.

Some analysts believe that was a factor in his power-grab because he had not been able to see a path to higher office with the help of the military-backed political party, which was routed in an election last year.

Before the coup, Min Aung Hlaing was considered an international pariah, condemned for presiding over the brutal 2017 crackdown on the country's stateless Rohingya population.

He has been banned from Facebook for stoking hate speech against the persecuted minority, and UN investigators have called on him and other top army leaders to be prosecuted for genocide.

But for years, he has steadfastly denied nearly all allegations of human rights abuses and says the military operations, which drove around 750,000 Rohingya refugees into Bangladesh, were justified to root out insurgents.

He was tapped to lead Myanmar's armed forces in 2011, just as a previous generation of military leaders was transitioning the country to a parliamentary system after decades of junta rule.

Min Aung Hlaing's regime has faced international condemnation and sanctions since the putsch, with concerns over mounting violence, political prisoners, internet shutdowns and a clawing back of press freedom.

His State Administration Council on Saturday insisted it was working on achieving "enduring peace for the entire nation", according to a state-run newspaper.