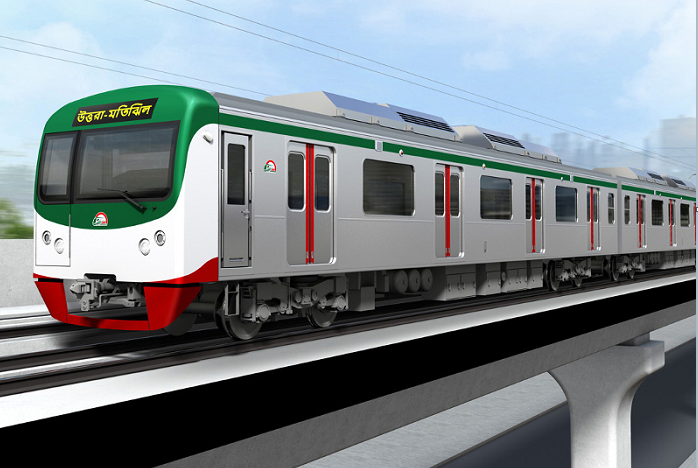 Authority of Dhaka Mass Rapid Transit Limited (DMTCL) has begun functional test of metro rail inside the depot at Uttara.

“We will start its mainline test on viaduct in August,” Managing Director of DMTCL MAN Siddique told journalists on Friday.

He said that after the mainline test, the Mass Rapid Transit (MRT) Line-6 will introduce performance test after that it will go for integrated test.

“The country's first overhead communication system ‘metro train’ in the country undertaken by Prime Minister Sheikh Hasina, will start its commercial journey from next year,” the managing director said.

He said that construction of all metro stations is going on in full swing during the coronavirus pandemic with maintaining health guidelines strictly.

According to the project details, the first set of metro train will go for trial run on viaduct and after successfully completion of the trial run then it will go for commercial operation from Uttara depot to Agargaon next year.

It said the first phase of the country’s first metro rail project between Uttara and Agargaon became visible and its progress stood at 87.80 percent, while the overall progress from Uttara to Motijheel rose to 67.63 percent.

It said 14.50-kilometer railway line was installed from Uttara to Agargaon. The second set of metro train reached at the depot on June 3, while third and fourth train set left Kobe port on June 22 for Mongla, which will reach Mongla last week on this month.

The fifth set will start its journey from Japan on July 16, which is expected to anchor on September 17 this year.

Besides, platforms construction of Uttara North, Uttara Center, Uttara South and Pallabi stations were completed, while platform construction of Mirpur-11, Kazipara and Shewrapa stations is going on, it said.

The metro rail is projected to carry 60,000 passengers per hour by traveling the entire route of 21.26 km from Uttara to Motijheel-Kamalapur Railway Station in less than 40 minutes.

It said if the current pace of work continues by following safety rules during the ongoing coronavirus situation, the rail project might be completed within December 2022.

Although workforce usually engage in construction works before checking COVID-19 test and if they are found negative then they join works, the project details said.

The length of the metro rail route up to Motijheel was 20.10 km. But now it was extended to Kamalapur Railway Station by 1.16 km. As a result, the number of stations was also increased to 16.

He said persons infected with COVID-19 were kept under home or institutional quarantine and if needed, they were admitted to a dedicated hospital.