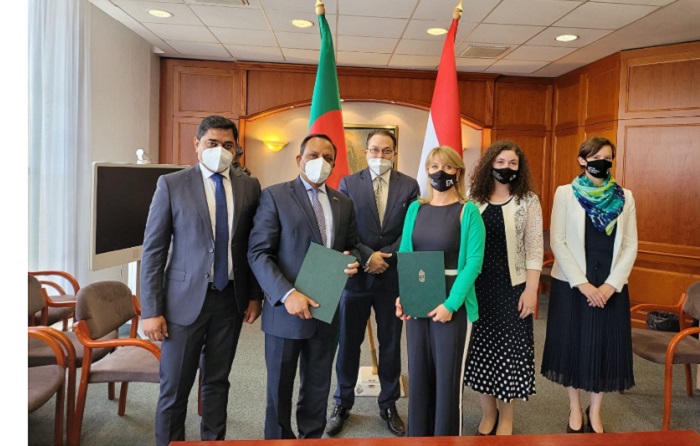 Bangladesh and Hungary signed a MoU which secured Hungarian Governments’ full scholarships under the Stipendium Hungaricum Programme for a yearly intake of 130 Bangladeshi students at undergraduate, graduate and post-graduate levels for next three years.

Bangladesh Ambassador to Austria, Hungary, and Slovenia Muhammad Abdul Muhith signed the MoU on behalf of the Government of Bangladesh while for the Hungarian side it was signed by Dr. Orsolya Pacsay-Tomassich, State Secretary for the Hungarian Diplomatic Academy and Scholarship Hungaricum Programme, Ministry of Foreign Affairs and Trade on Wednesday.

The signing ceremony was held at the Ministry of Foreign Affairs and Trade of Hungary in Budapest.

There are 30 dedicated scholarships for the students and professionals of nuclear energetics in the new MoU, which is a new initiative comparing to the previous 100-scholarship per year programme for Bangladeshi students ran for three years.

During the meeting before the Ceremony, two sides had a fruitful discussion on the future roadmap for the growing bilateral relations between Bangladesh and Hungary including the important elements such as an agreement on economic cooperation, establishment of a joint economic commission, a memorandum of understanding for cooperation in the health sector, operation follow-up of existing bilateral instruments including on water management and agriculture, and the Foreign Minister-level Joint Communiqué of September 2020.

It was also discussed about the joint-celebration of the Birth Centenary of the Father of the Nation Bangabandhu Sheikh Mujibur Rahman in Budapest this year, cooperation and reciprocal support mechanism at the multilateral level, and a possible memorandum of understanding to train Bangladeshi young diplomats at the Hungarian Diplomatic Academy.

The Bangladesh Ambassador was accompanied by Rahat Bin Zaman, Minister & Deputy Chief of Mission as well as the Bangladesh Honorary Consul in Budapest Dr. Greg. Pataki.