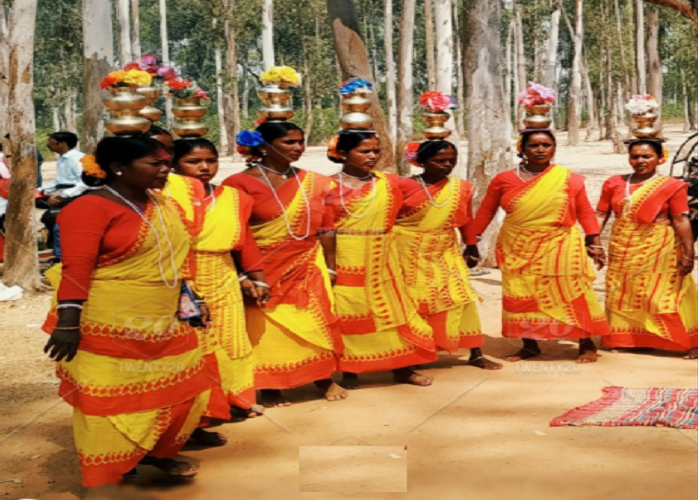 Shakuntala Bhowmik, an elderly member of the Santhal community, one of the oldest ethnic groups in Bangladesh, found a permanent home after waiting for 70 years, thanks to Prime Minister Sheikh Hasina’s a special initiative for the ethnic minorities.

The government has taken the special programme, titled ‘Development Assistance for Special Area (Except Chattogram Hill Tracts)’ for improving the living standard of the people of 50 ethnic minorities who live in the plain land.

Under the initiative, Prime Minister Sheikh Hasina has given a total of 3,554 houses as gift to the landless and homeless people of ethnic minority groups who live on plain lands across the country on the occasion of ‘Mujib Borsho’.

As part of the initiative, Shakuntala Bhowmik, a dweller of the Kamaichhara village of Bahubal in Habiganj , has got a two-room accommodation with a kitchen, a toilet, and a veranda on two decimals land, entirely under her legal possession.

“I had been living in the neighborhoods and relatives’ homes, having no piece of land of my own. As a day-labourer with four family members, I did not have the ability to procure any land either,” she said.

Standing at the end of her life, Shakuntala Bhowmik considers herself a millionaire after receiving a gift from Prime Minister Sheikh Hasina.

He said, “Sheikh Hasina is giving me a lot of happiness. She has given me a house. May god give my life to Hasina.”

Another member of the ethnic minority, Sardar Saren, also found her permanent residence after waiting for 65 years.

As part of the government’s initiative, Sardar Saren, a dweller of the Morabostapukor area of Kandia union under Gobindaganj upazila in Gaibandha district, has also got a two-room accommodation with a kitchen, a toilet, and a veranda on two decimals land, entirely under her legal possession.

“I have been living in the neighborhood since my birth. I am a day labour and it is very difficult to maintain all expenses of my six family members. I did not have the ability to procure any land either,” she said.

Saren emotionally recalled the days when her family of six, including two widowed daughters and a grandson, languished in the hut that was constantly damaged by rain and storm.

Saren looked back to the shabby hut while walking towards her new nearby home – a concrete house with tin-shed – built for the ethnic minority community under the premier’s initiative to improve the living standard of ethnic minorities living on plains.

Like Sarder, a total of 50 families of the Santhal community who were leading a similar life, were rehabilitated in the Morabostapukur area of Gobindaganj upazila of Rangpur district.

Talking to BSS, Secretary of the Prime Minister’s Office (PMO) Md Tofazzel Hossain Miah said along with houses, the government has already given 2,672 bicycles to the school-going children of the ethnic groups, so that they can get access to education easily.

He mentioned that the programme is running in 207 upazilas under 46 districts of the eight divisions at a cost of Taka 7,300.15 lakh.

He informed that a total of 2,500 students of the ethnic communities have received Taka 6.25 crore (Taka 25,000 each) during the fiscal for the higher education.

Earlier, Tofazzel Hossain Miah said, the government built a total of 1,278 homes and distributed 1,000 bicycles to the ethnic communities who live in the plain land.

Apart from the ethnic minorities living on the plane lands, the PMO secretary said, such groups living in the three hill districts — Rangamati, Bandarban, and Khagrachari — were given identical homes with the same facilities.