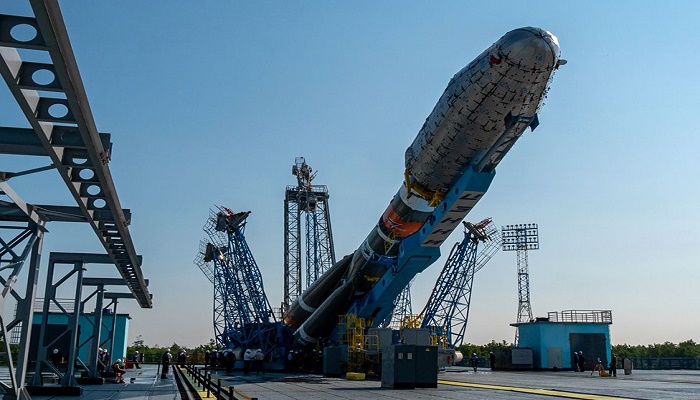 The firm is launching another 36 satellites, taking its in-orbit mega-constellation to 254.

Although many more are needed to complete the network, this number is enough to start offering a commercial service to a great swathe of the Northern Hemisphere.

This should start at the year's end.

"These things don't happen overnight; there's been a tremendous amount of hard work taking place over the last few months. But this launch is special," said OneWeb CEO Neil Masterson.

"This is the one that gives us connectivity from 50 degrees North latitude to the North Pole, and covers Northern Europe, the UK, Greenland, Canada, Alaska and Iceland," he told BBC News.

The latest batch of satellites is due to go up from the Vostochny Cosmodrome in the Far East of Russia.

The Soyuz carrier rocket is timed to leave the launch pad at precisely 09:48 local time (12:48 GMT; 13:48 BST). Confirmation of the successful release of all the spacecraft, together with the acquisition of their signals, is not expected to be achieved until several hours later.

It's little more than a year since the British government and the Indian conglomerate Bharti Global bid to buy OneWeb out of bankruptcy, each putting $500m (£400m) into the struggling firm.

Since then other investors have joined the project, convinced of its future viability. Chief among these is the major French satellite telecommunications operator, Eutelsat.

And Bharti's decision this week to pump a further $500m into the venture essentially completes the necessary financing ($2.4bn) to roll out the remainder of the mega-constellation - an orbiting fleet of some 650 spacecraft. This will require a further 10 launches beyond Thursday's mission, but should be done by the middle of 2022.

Of great significance to the UK market was the announcement on Sunday of a memorandum of understanding signed between OneWeb and British Telecom. The pair are to explore how they can work together, both in Britain and across the globe.

BT could take a very large share of the connectivity capacity over Britain. Discussions are ongoing, but the idea is that the telecoms giant would deploy OneWeb as part of its broadband solutions.

This would see so-called "not-spots" - places that have very limited or zero internet, or phone, coverage - getting a OneWeb-enabled local hub, from which individual consumers could then take a slice of bandwidth.

"Our offering is that we provide fibre-optic-like connectivity where there's no fibre. Our goal is to help companies like BT, and other telephone companies around the world, to serve their customers better by filling in the holes in their network, or adding robustness to their network," Mr Masterson said.

This was part of the objective of the UK government in taking a share in OneWeb last year. Ministers are pushing a policy called Project Gigabit, which aims to improve substantially rural broadband coverage. It's envisaged OneWeb will play an important role in this initiative.

OneWeb's chief competitor in the internet mega-constellation business is Starlink, which is being set up by the Californian tech entrepreneur Elon Musk and his SpaceX rocket company.

Starlink has over 1,500 satellites in orbit now with thousands more to follow (the architecture of its network requires more satellites than OneWeb). It is, though, already beta testing its internet connections, and Mr Musk said this week he hoped to have a global service available by August with as many as 500,000 users in 12 months' time.

OneWeb's trials will ramp up through the autumn with a commercial "switch-on of service" above 50 degrees North likely in November.

It has to be said the two competitors are following different business models. Whereas OneWeb will be working with partner telecommunications companies to deliver its broadband offering, Starlink is be selling a big chunk of its bandwidth direct to the customer.

What's clear is that these two companies are well ahead of any chasing pack.

Wannabes include a proposition from the Amazon retail giant, known as Kuiper, and a concept from the long-established Canadian satellite communications company Telesat, called Lightspeed. Neither has launched an operational spacecraft, however.

The European Commission and the Chinese government have also talked of launching internet constellations, but hard detail on what these systems would look like is not yet available.