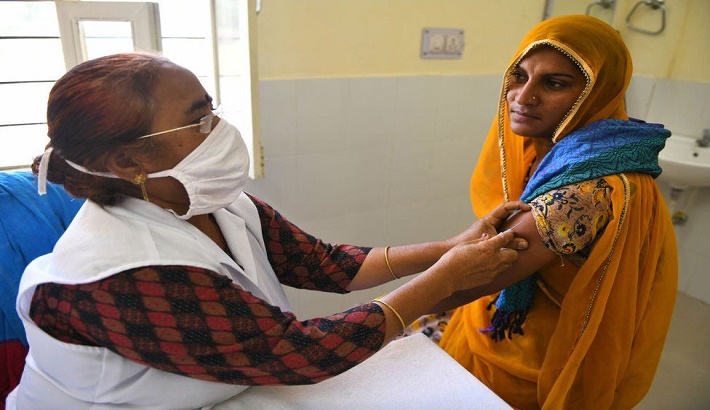 On a sweltering June afternoon, Madhu Kumari, a healthcare worker knocked on a door in Suraudha, a village tucked deep inside Bihar state. Her job: to enrol people for Covid jabs.

On seeing her, a few women sitting outside their houses across the street, laughed.

Moments later, a woman stormed out of the house, hurling abuses at Ms Madhu Kumari. "I will make your life hell if you talk about the vaccine," Tetri Devi bellowed, before slamming the door on the healthcare worker's face.

For Ms Madhu Kumari, and thousands of other healthcare workers across Bihar, such outbursts have become a part of their job as they travel from village to village, urging people to get vaccinated.

Wherever they go, villagers, especially women, shun them or ignore what they have to say.

Some raise unfounded claims that the shots can cause infertility while others simply question the vaccine's effectiveness, several healthcare workers told the BBC.

In Suraudha, there is widespread belief that the vaccine is more dangerous than the virus itself. "They think foreigners are behind the [vaccines] and it's part of some conspiracy to kill the poor," Ms Madhu Kumari said.

After a promising start in January, India's vaccine drive has been hobbled by challenges. A severe shortfall from May onwards left out many, mostly the poor, from registering for jabs.

But logistics aside, there is another problem - people are simply refusing to take the jab, particularly in rural areas where nearly 65% of India's population lives. This has alarmed experts, many of whom warn of an impending third wave. About 5% of India's people have been fully vaccinated so far.

Ms Madhu Kumari said vaccine hesitancy is stronger among women who fear it might kill them or make them sterile. Reports about jabs disrupting the menstruation cycle, a likely short-term side effect, have added to the fears.

And in almost every Indian state, more men are getting vaccinated than women.

According to the Centre for Economic Data & Analysis at Ashoka University, the female to male vaccination ratio in 29 states and federally administered territories remained as low as 0.90 till 3 June. So, only 90 women received a dose for every 100 men vaccinated during this period.

In Bihar, it's slightly higher - 96 women for every 100 men - but lower than states such as Kerala and Karnataka, where more women have been getting the jabs than men.

'Our caste doesn't get it'

Experts say that besides misinformation, the lack of agency and patriarchal values that place women's healthcare needs secondary to those of men have contributed to the skewed ratio.

"There is deep distrust," said Dr Pushpam, who goes by only her first name. "Women don't have access to information and that makes them vulnerable to rumours."

Healthcare workers also told the BBC that the hesitancy is higher among Dalits, who are at the bottom of a deeply discriminatory Hindu caste hierarchy.

"The vaccination programme has become a class and caste thing," said Kiran Devi, a healthcare worker.

Sunita Devi, a Dalit who lives in Suraudha, said her entire community had decided against taking the vaccine. "I know Kiran's family has taken it. But they are upper caste," she added.

Her parents took their first dose two months ago in a nearby village and got a fever, a common side effect but rarely serious. Now, Sunita Devi said, they are unwilling to go for the second jab.

She herself fell sick in March and had Covid-19 symptoms but like many others, she refused to get tested.

'I hope this doesn't kill me'

Healthcare workers said such rumours and conspiracy theories have "spread like wildfire" and quashing them has become increasingly difficult.

The state government has taken some steps to ramp up vaccinations in rural areas.

It launched a "vaccine express", a mobile van carrying healthcare staff to remote areas, offering free vaccines to villagers. The idea is to provide on-site vaccinations to reach women who can't travel far from home.

But the initiative has met with little success. There are days when teams return without vaccinating a single person, healthcare workers said.

On a recent morning, healthcare workers who had set up the mobile camp at a school in Bihar's Sirpatpur village were frustrated.

By 1:30pm, they had managed to vaccinate just 15 people. A few women did turn up, but reluctantly.

Phulwa Devi, 50, said she had come to the camp only on the insistence of a healthcare worker. "I have a heart condition. I hope this doesn't kill me," she added.

Mamta Devi, 32, said she had come against her husband's wishes. A daily wage labourer, he was worried about what would happen to their four children if he or she died from the jab, she added.

A 50-year-old woman had recently died in a nearby village three days after she got the jab. Villagers blamed the vaccine for her death.

As the day neared an end, Sobhi Kumari, a healthcare worker, walked out into the rain and stood outside the school, calling people to get their jabs.

A woman peeped out of an adjacent lane and told Ms Sobhi Kumari to back off. Others simply laughed.

"We leave it to God now," Ms Sobhi Kumari said.

Inside the school, another healthcare worker, Poonam Kumari, telephoned people, desperately pleading with them to come to the camp.

By the end of the day, they had managed to vaccinate just 20 people, including 15 women.