Death toll rises to 18 in US condo collapse 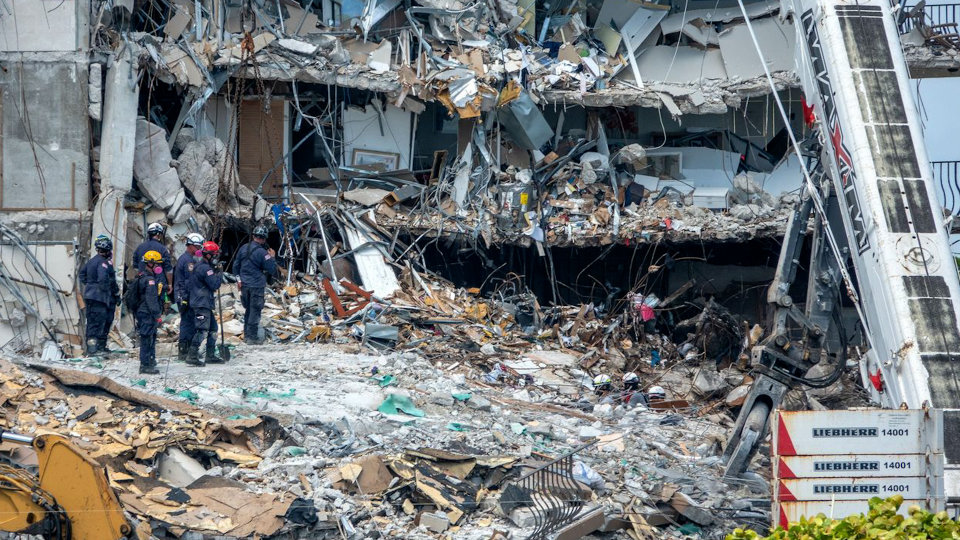 Two more bodies were discovered in the rubble of a collapsed apartment building in Florida, authorities said Wednesday evening, during the seventh day of searching for more than 140 people still unaccounted for.

The official death toll now stands at 18 after most of a building in the Miami-area town of Surfside suddenly pancaked early last Thursday, but hopes are dwindling that the hundreds of rescuers combing the oceanfront site will find anyone alive.

"I'm very pained to tell you we found two additional bodies in the rubble, which brings our total count to 18," Miami-Dade County Mayor Daniella Levine Cava told a news conference, adding that among the dead are two children, ages four and 10.

Any loss of life "is a tragedy," she said, "but the loss of our children is too great to bear."

Officials at the conference also said contingency plans were being put in place should a tropical cyclone now swirling in the Atlantic strengthen and strike the southern Florida coast next week, although the National Hurricane Center has said it is "too soon to determine what if any impacts could occur."

Elad Edri, deputy commander of the Israeli search and rescue team, earlier in the day detailed how rescuers have completed a map outlining the bedrooms and other living spaces in the building where residents could have been trapped.

But he added that "it's been more than six days from the collapsing and the chances to find the lives are low."

He also reported that rescuers had made it to an underground parking structure where it had been hoped they might discover people who had been trapped in cars, but found no one.

The cave-in of the 12-story Champlain Towers South building has sparked a search-and-rescue effort involving engineers and specialists from across the United States and as far afield as Mexico and Israel.

US President Joe Biden will on Thursday visit the site with First Lady Jill Biden to meet with families of the victims.

Residents in the part of Champlain Towers South that remained intact reported being awakened around 1:30 am (0530 GMT) Thursday by what sounded like cracks of thunder that shook their rooms.

"It was like an earthquake," Janette Aguero, who escaped from the tower's 11th floor with her family, told AFP.

Rescuers who arrived in the moments after the tower came down helped evacuate dozens of residents, and pulled one teenage boy alive from the rubble.

But since then, no other survivors have been found, despite huge numbers of rescuers combing the debris with the help of sniffer dogs and cranes.

Levine Cava said on Tuesday that 210 people were working on the site.

Experts are looking at possible pre-existing critical flaws in the structure of the apartment tower.

An October 2018 report released by city officials last Friday revealed fears of "major structural damage" in the complex, from the concrete slab under the pool deck to the columns and beams in the parking garage.

In a letter to residents in April, Jean Wodnicki, the chair of the condo association, described "accelerating" damage to the building since then.

Repairs had been set to begin soon in the 40-year-old building.