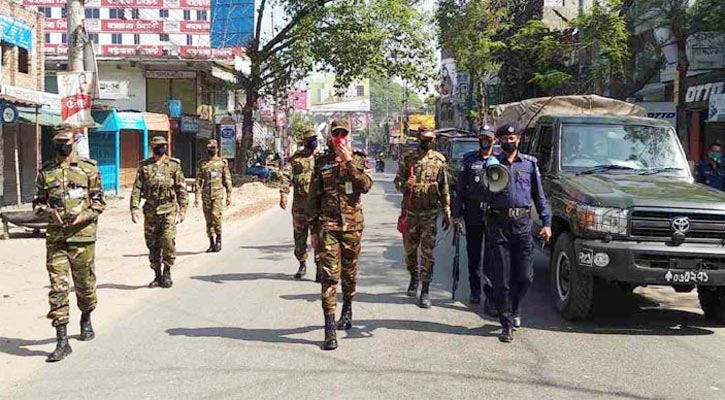 The residents of Dhaka woke up to deserted roads as Bangladesh entered a stringent lockdown on Thursday with patrol teams out there to convince people to stay off the streets.

The complete lockdown, which came into effect on Thursday morning to mitigate the spread of Coronavirus, will continue till July 7 midnight.

Army personnel started patrolling the city streets in aid of the civil administration as the government scrambles to bring the Covid-19 situation under control.

Police have set up barricades and check-posts at all important points of the city to monitor the movement of vehicles as well as people. So, most roads in the capital were found almost empty with fewer private vehicles moving.

However, slow-moving rickshaws were seen moving everywhere in the city.

Kitchen markets in the city remained open as the government allowed those to operate from 8 am to 5 pm.

Abu Saleh Mohammad Raihan, joint commissioner (Traffic North) of Dhaka Metropolitan Police, said, “Roughly 25 per cent vehicles are plying the city roads compared to the last day as some offices related to emergency services will remain open during the lockdown. However, the police allowed only those vehicles which had valid reasons to move. Army personnel are also there patrolling the city streets.”

No CNG-run auto-rickshaw other than rickshaws were seen on the roads since morning, he said.

Traffic inspector Ziauddin (Demra) said, “Some motorised vehicles are moving there but those were allowed only after checking.”

Asaduzzaman, another traffic inspector (Mohakhali), said: “The number of vehicles is negligible and most of those running with valid reasons.”

However, the public transport remained off the road as per the government directives.

A surge in coronavirus cases prompted the government to go for the tough lockdown. On Wednesday, the country recorded 115 deaths - its highest single-day fatality - and 8,822 new cases.

All the government non-government, autonomous and private offices will remain closed during the period.

All modes of public transport, including those of road, river, railway and air, will remain suspended during the lockdown. All the shopping malls and markets will also remain closed.

All the tourist spots, resorts and community centres will remain closed while all kinds of public gatherings, including social programmes, birthday and picnic parties, political and religious events will remain suspended until further notice.

However, the restriction will not be applicable for carrying goods, emergency services and production. But the offices related to air, maritime and river and land ports will remain out of the preview of the lockdown.

Kitchen markets and shops with daily essentials will remain open from 9 am to 5 pm, and customers can purchase their goods following health safety protocols. Local administrations and the authorities concerned will ensure it.

No one will be allowed to venture out except for certain emergency needs (to purchase medicines, daily essentials, to take medical services and burial/ cremation of dead bodies, taking Covid-19 jabs etc). Legal action will be taken against those who will violate the restrictions.

Hotels and restaurants can operate from 8 am to 8 pm with takeaway/online services only.

Those who need to take vaccines can move after showing vaccine cards.