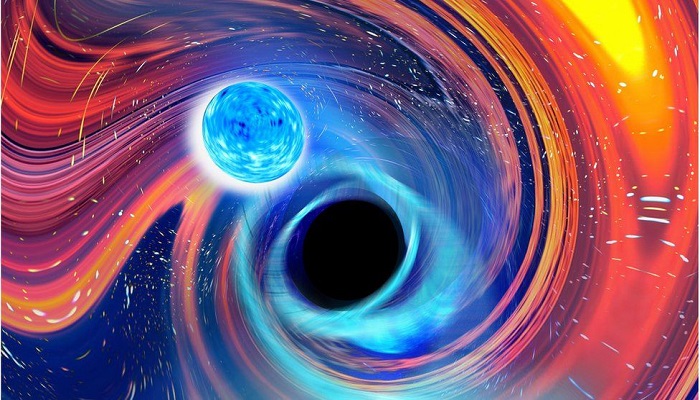 Scientists have detected two collisions between a neutron star and a black hole in the space of 10 days.

Researchers predicted that such collisions would occur, but did not know how often.

The observations could mean that some ideas of how stars and galaxies form may need to be revised.

"We have to go back to the drawing board and rewrite our theories," he said effusively.

"We have learned a bit of a lesson again. When we assume something we tend to be proved wrong after a while. So we have to keep our minds open and see what the Universe is telling us."

Black holes are astronomical objects that have such strong gravity, not even light can escape. Neutron stars are dead stars that are incredibly dense. A teaspoonful of material from a neutron star is estimated to weigh around four billion tonnes.

Both objects are cosmological monsters, but black holes are considerably more massive than neutron stars.

When objects as massive as these collide they create ripples in the fabric of space called gravitational waves. And it is these ripples that the researchers have detected.

The researchers looked back at earlier observations with fresh eyes and many of them are likely to to have been similar mismatched collisions.

So apart from completing the set, why does this latest collision matter?

It is because, according to current theories and past observations, neutron stars tend to be found with - and collide into - other neutron stars. And the same should be true of black holes.

But the two neutron star-black hole collisions, published in the Astrophysical Journal Letters, may pose a challenge to that general idea.

Instead, it may lean towards another suite of theories, which assume that black holes and neutron stars are indeed found alongside one other. These alternative theories also imply that stars and galaxies formed in different ways to the picture painted by standard views of how the cosmos formed.

For example, over billions of years, stars have produced many of the building blocks from which larger cosmic structures - such as planets and galaxies - are formed. The production within stars of so-called heavy elements - such as iron, carbon and oxygen - is related to the proportion of black holes and neutron stars in the Universe.

The force with which stars push out the material inside them when they explode is also related to the proportion of black holes and neutron stars. So the new finding suggests that stars produce fewer heavy elements and push them out with less force than previously thought, which, in turn, has implications for real-world observations of the Universe.

No existing theory can perfectly explain what astronomers see in the night sky. But, according to Dr Raymond, many of the ideas can be tweaked to better fit what we know.

Prof Sheila Rowan, of Glasgow University, told BBC News that observations of the type and frequency of collisions of black holes and neutron stars over the past six years is creating an ever more detailed picture of the dynamics inside galaxies.

"All this is giving us a rich picture of stellar evolution. This latest observation is another first for us in our understanding of what is out there in the Universe and how it came to be the way it is," she said.

The collisions were detected by measuring waves caused by the sudden changes in gravitational forces that occur when two massive celestial bodies collide. These are ripples in the fabric of space itself, just like a stone thrown into a still pond.

These so-called gravitational waves travel hundreds of millions of light years across space and were picked by detectors in Washington State and Louisiana in the US and the Virgo detector in central Italy. Together, they form the Advanced Light Interferometer Gravitational-Wave Observatory (ALIGO) collaboration.

By the time they reach us, the ripples are tiny - less than the width of an atom. The detectors themselves are among the most sensitive instruments ever constructed.

In future, the team hopes to detect neutron star-black hole collisions which are also observed by telescopes - both in space and on the ground. This will enable scientists to find out more about the super-heavy materials neutron stars are made of.

The ALIGO collaboration comprises over 1,300 scientists from 18 countries, and includes researchers from 11 UK universities.