No space for militancy in Bangladesh: RAB chief 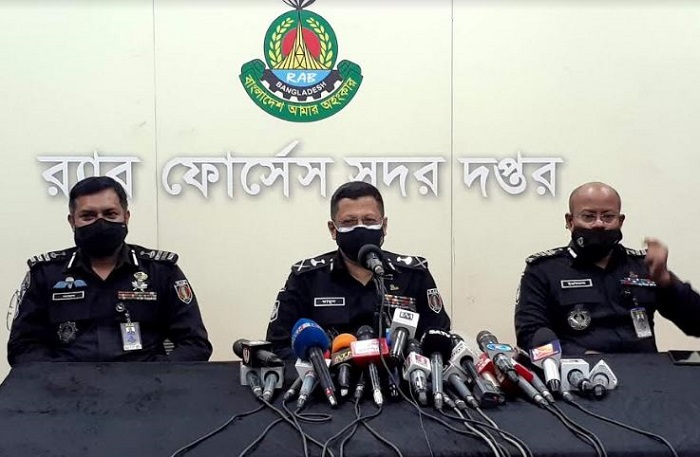 “The anti-crime forces arrested 2,500 militants so far since its inception as we are one step ahead of them,” he said while briefing reporters on law and order situation at the RAB headquarters.

The RAB chief said, “The way we are working against militancy, this menace will not exist on the soil of Bangladesh. RAB arrested 1,500 militants after the Holey Artisan attack alone.”

He also said that the anti-militant operations are ongoing and will continue in the future as well.

Replying to a question on militant’s capacity of attack, he said, “Based on our intelligence report, we think militants are incapable of carrying out any major attack.”

The RAB DG said that after the Holey Artisan attack, RAB had weakened as a militant group following the arrests of important leaders, financiers and members of various levels.

“Not only conducting anti-militant operations, the RAB holds anti-militancy campaigns and rallies across the country. Besides, initiatives were taken to eradicate militancy and surrender to misguided militants,” he added.

Chowdhury Abdullah Al Mamun said patrons of juvenile gangs (Kishor Gang) would not be spared, adding that juvenile delinquency was on the rise at present. “They are also involved in violent and brutal crimes like murder. To save the next generation, it is necessary to pull the reins of juvenile gang culture now,” he said.

Mamun further said RAB is working to prevent juvenile delinquency. “RAB is conducting a tough campaign against the ‘Kishor Gang’. Those who are transforming the teenagers into gangs will not be spared. We will all work together to eliminate ‘Kishor Gang’,” he added.

About drugs, the RAB DG said, “Recently, we are observing some unconventional drugs. We have arrested them. In the meantime, the RAB has arrested more than 46,000 drug dealers.”

“Some sabotage was planned on the occasion of the golden jubilee of independence. Even there were anti-state activities too. We have arrested them. Those who will carry out such activities will not be spares, he warned.

Chowdhury Abdullah Al Mamun said the RAB has gained the trust and love of people through providing food aid to the unemployed, helpless and destitute people and distributing safety equipment and emergency services to sick patients where necessary and other humanitarian activities during the COVID-19 pandemic.

He said that Lieutenant Colonel Azad was martyred in the next militant operation of Holey Artisan. He prayed forgiveness of the souls of Lt Col Azad and all the patriotic, fearless RAB members who have sacrificed their lives in the service.

The RAB chief extended his deepest sympathy and condolences to their families.

He also expressed special gratitude to the doctors, nurses, journalists, members of the law enforcement agencies, public representatives and other professionals who have been working for the country and humanity in the fight against the deadly coronavirus.