Large snail washes up on river bank in Andhra Pradesh, sold for ₹ 18,000 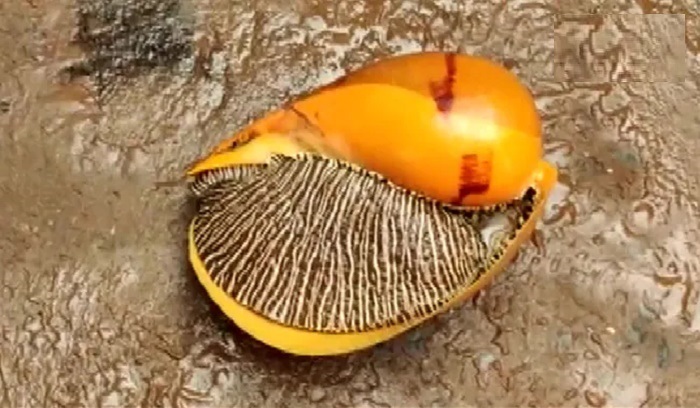 A gigantic sea snail known as the ‘Syrinx Aruanus' False Trumpet or the Australian trumpet, found on the banks of the Godavari river in Uppada village of Andhra Pradesh, was auctioned for a whopping Rs 18,000 on Sunday. Popular for making ornaments, or specimens for Dorset gifts, the Australian trumpet is a rare collectible among marine surfers. The species have a large shell encase or a gorgonian coral enclosing its body that can measure up to 15 cm.

‘Syrinx Aruanus’ is the largest known snail in the world that belongs to the gastropod family. It is widely hunted for its gigantic shell as well as edible flesh. The species feed on the sedentary polychaete worms or the starfish and can grow as large as 91 cm (or 35 inches), weighing up to 18 kilograms.

While this rare species is mostly found in the northern half of Australia, including eastern Indonesia and Papua New Guinea, it washed ashore on the river in East Godavari district, according to ANI. The seashell for the Australian trumpet is among the world’s largest and is also of ritualistic significance among the Hindu culture as it has been traditionally used for making Shankhas, a blowing instrument.

The mammoth shell from the Syrinx Aruanus is in the shape of a trumpet which is spiral with a pointed tip upwards in the likeness of a cone, and a large broader base with an opening downwards. Not much is known about the behaviour or ecology of these snail species that are marine predators.

While the Syrinx Aruanus is a rare species that is spotted on the shores, many other species of snails that are easily spotted on land such as the greater Bermuda land snails are driven to extinction in their native habitat, almost totally disappearing in 2014 before a small population was discovered and bred in captivity in the UK. In Australia’s New South Wales, among the invertebrate species that are listed on the endangered list, there are at least seven land snail species and one land snail community found only in western Sydney in the Cumberland Plain Woodland ecosystem.

The world’s most beautiful snails known as the Cuban painted snails (or the Polymita Picta) are “critically endangered” due to illegal trade as they are widely sought by the collectors for their beautiful texture, complex patterns on the shells, and a range of vibrant colours. The Convention on International Trade in Endangered Species of Wild Fauna and Flora (CITES) banned its shell trading in 2017 after all six species of the world’s most beautiful snails were threatened by humans. Ocean snails are also the first marine critters to be officially endangered by deep-sea mining. The International Union for Conservation of Nature (IUCN) added scaly-foot snails that live near thermal vents as to its Red List of endangered species in July 2019.