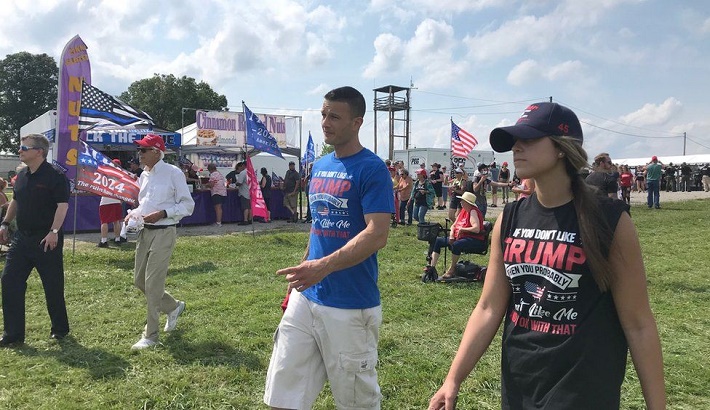 Vindication Night: Donald Trump's idea about a Wuhan lab leak, once dismissed as a conspiracy theory, has gained respectability. He is now using this shift in scientific thinking as a political weapon, to energise his supporters.

Trump gloated at a rally in Ohio on Saturday evening, and said he had been proved right.

He spoke of his belief that the Coronavirus was scientifically engineered, in a laboratory in the Chinese city of Wuhan.

"I said it comes out of Wuhan - it comes out of the lab," he told his supporters, men and women dressed in red Make America Great Again hats, gathered at the rally, southwest of Cleveland. He was referring to the deadly virus, and its origin.

Afterwards, Trump said, people "went crazy". But later, he explained, people looked at his theory in a different way: "Now they're saying: Most likely it came out of the Wuhan lab." When he spoke about his theory of a lab leak, and the way that scientists are now taking his idea seriously, the crowd roared their approval. The former president, and his supporters, had once been mocked for their theory, but no longer.

Until a few months ago, many journalists at the Washington Post, the New York Times and other media organisations treated the lab-leak theory in a dismissive manner. So did US scientists.

In April 2020, Trump, while serving as president, said that people were looking closely at the theory of a lab leak.

At the time, the virus was wreaking havoc in the US, and would soon upend the economy and destroy Trump's political prospects. More than 600,000 people in the US have died of the virus, and it continues to inflict a horrific toll across the country, and around the world.

The origins of the virus remain unknown, and the theory about a lab leak is still just an idea, a hypothesis that has not been proven. Yet for many the theory has become more plausible, partly because no evidence has emerged to back alternative theories.

A classified US intelligence report - saying three researchers at the Wuhan laboratory were treated in hospital in November 2019, just before the virus began infecting humans in the city - began circulating in US media in May.

Members of the World Health Organization team travelled to Wuhan earlier this year, and afterwards, scientists began to talk about the possibility that the virus had come from a lab.

Anthony Fauci, the president's coronavirus response coordinator, spoke about the lab-leak theory and the origins of the virus during an interview with journalist Katty Kay on BBC World News America, saying that it is "much more likely that this a natural occurrence... but we'll all keep an open mind that until you nail down completely that connection... But most scientists believe... that this was a natural occurrence".

In May, President Joe Biden ordered an intelligence inquiry into the origins of the virus. Results from the inquiry will be presented later this summer.

Those who work at the Wuhan lab in China have denied that a leak occurred from the facilities. Chinese officials have expressed outrage at the accusations against them, and said that no-one knows where the virus came from. But China itself was accused of impeding investigations, early on.

The hypothesis about a leak in the Chinese lab is emotionally charged here in the US, and abroad. Trump's critics said that he was trying to shirk his own responsibility for the pandemic by blaming Chinese officials for the catastrophe.

Most scientists in the US rejected the idea of a lab leak, at least initially. They spoke instead of the possibility that the virus had come from an animal, perhaps a bat. But months later, that link has not been proven.

Yet conservative commentators picked up on Trump's idea that the virus leaked from a lab in Wuhan, the city where the first cases were reported. Scientists had conducted research on bats at a lab, the Wuhan Institute of Virology, and Trump claimed that the virus had leaked from a scientific facility.

Stories about the lab-leak theory were aired regularly on conservative media. As a result, Republicans were more likely to be familiar with the theory than Democrats were, according to Morning Consult polling. About 46% of Republicans said they had often heard about the theory, compared to less than a quarter of Democrats.

Trump has been capitalising on his early assessment of the virus, in political terms. As David Cohen, a political science professor at University of Akron explains: "He wants to say, 'Look, I was right about this. People didn't listen to me [about the lab leak], and it's all turning out to be true'."

Trump is unlikely to convince many Democrats, or gain new followers, that he is a reliable source, because of his idea about the lab leak. He has gotten a lot wrong about the virus, making a staggering number of false claims, ones that journalists have documented.

He remains deeply unpopular in many parts of the US. Yet he is using the controversy over the origins of the virus to show his supporters he has triumphed over those who once attacked him. His supporters love it, and him.

One of his supporters, engineer Paul Rickey from Grafton, Ohio, was in high spirits at the rally and expressed his enthusiasm for Trump and his theory about the virus.

Many of the people at the rally said they wished that scientists had taken Trump's idea about a lab leak seriously much earlier.

"It came from a lab. Where else would it come from?" says James Cropp, a factory worker who lives in Wellington, looking exasperated. He walked across the grass, while songs by Elton John, one of Trump's favourite musicians, played. "Why would you not pursue this disease's origins?" Cropp wonders.

Cropp and others at the fairgrounds discussed various theories about the virus, mulling over "gain-of-function" research, laboratory efforts to intensify a virus, a level of scientific discussion that is rarely heard at a political rally. Nearly all agreed on one point: Trump had been right, but the media just ignored him.

"He was dead on," says Hope Baros, who had travelled from Knox, Indiana, with her husband Jeff, a union labourer, to attend the rally, while discussing Trump's theory about the virus. "Absolutely," her husband says, standing close to her. "One-hundred percent."

A moment later Michael Barnes, a general contractor who lives in Valparaiso, Indiana, wearing a white jumpsuit that evoked the rock singer Elvis Presley, stepped closer to them. "The media likes to make up their own facts," Barnes says, "and not rely on the science."

Others at the rally said that they were glad to see that science has caught up with Trump's analysis of the virus, and its origins.

Hayley Keith, a barber who works in Wellington, says that liberals mocked Trump for his views about the virus: "Before it was, 'Oh, he's crazy,' with all of them pointing fingers and saying we're crazy too. And I don't want to say I told you so, but... ". She fell silent. She knew she had made her point, just as Trump did that night, loudly, from the stage, while his supporters cheered.