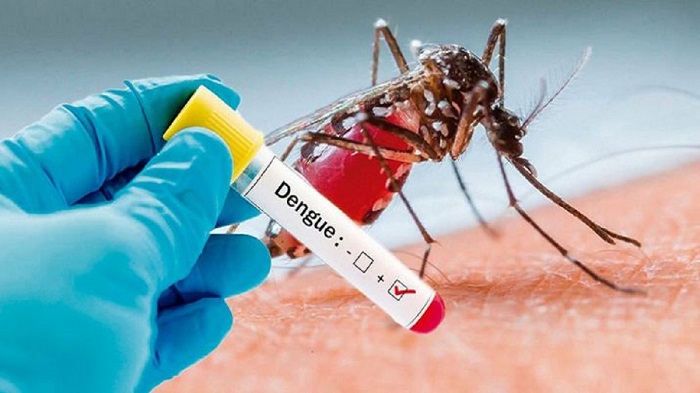 With a rise in dengue cases in the country for the last few weeks, health experts have warned that the situation may take a serious turn anytime during the ongoing rainy season amid an uphill battle against coronavirus.

They fear that the concurrent rise in both coronavirus and dengue cases will put a severe strain on the country’s healthcare system.

“Alongside coronavirus infections, some dengue cases are also being reported now. The cases are on a gradual rise since June,” Prof Dr Md Robed Amin, line director (NCDC) of the Directorate General of Health Services (DGHS), said in a health bulletin on Wednesday.

Mentioning that the prevalence of Aedes mosquito occurs during rainy season which lasts usually from April to October, he said people have to remain alert and destroy all possible sources of clean stagnant water in their houses in a bid to prevent dengue.

Robed Amin reminded all that the country’s dengue situation took a dangerous turn in 2019 when over one lakh dengue patients were hospitalised and around 179 deaths were reported from the disease.

Of them, 18 dengue patients were detected in Dhaka city in the last 24 hours while 74 were undergoing treatment in 41 government and private hospitals of the capital.

Talking to the Daily Sun, Dr Afsana Alamgir Khan, deputy programme manager of Malaria and Aedes Transmitted Diseases Control Programme of the DGHS, said, “This is the peak season for dengue as maximum prevalence of Aedes mosquito occurs during rainy season.”

She said the DGHS has already carried out several programmes, including publishing notice in newspapers, to make people aware of dengue.

“The awareness programmes were also held at the upazila level. At the same time, we held meetings with councillors of both Dhaka South City Corporation and Dhaka North City Corporation to make the city dwellers aware and ensure that households are cleaned,” Dr Afsana said.

The DGHS official further said if anyone catches fever, they are advising him/her to carry out both Covid-19 and dengue tests at the same time. “Many people die from dengue without treatment or for delayed treatment.”

The DSCC and DNCC also said they are conducting anti-mosquito drives in the capital.

Talking to the Daily Sun, Dr ASM Alamgir, principal scientific officer of the Institute of Epidemiology, Disease Control and Research (IEDCR), said, “People should remain alert to dengue particularly during this rainy season as its outbreak has already been reported in some countries, including Sri Lanka.”

He also warned that though the situation is still under control, it may take an alarming turn anytime if people do not maintain guidelines in this regard and control the vector of the disease.

Sources at the health and local government and rural development (LGRD) ministries said the government has taken various initiatives, including carrying out anti-mosquito drives, to control the vector in a bid to prevent dengue and other mosquito-borne diseases in the country.

According to a DGHS report, a total of 1,405 dengue patients were detected across the country from January 1 to December 31, 2020. The IEDCR confirmed seven deaths from dengue last year.

Health experts said although dengue spreads mainly in rainy season from April to October, it might infect people anytime round the year. “Aedes mosquito is the carrier of the dengue virus. If the mosquito is not controlled, dengue and chikungunya may break out anytime at an alarming rate,” Saif Ullah Munshi, chairman of Virology Department at Bangabandhu Sheikh Mujib Medical University (BSMMU), told the Daily Sun.

He said there are two ways to fight against these mosquito-borne diseases -- one is to produce vaccine or anti-viral drug while the other is to kill mosquitoes and destroy their breeding grounds.

The World Health Organization (WHO) said there is no specific treatment for dengue or severe dengue, but early detection and access to proper medical care lowers the fatality rate below 1 per cent.

Pre-Monsoon Aedes Survey-2021 of the DGHS said multi-storey buildings and under-construction buildings are account for around 80 per cent of Aedes mosquito breeding grounds in Dhaka city.

The study found that 45.24 per cent Aedes mosquito breeding grounds are in high rises while the figure for under-construction buildings is 34.52 per cent, for single buildings 15.48 per cent and for slum areas 4.76 per cent.