Heroics of Bangladesh army in Mali

Peacekeepers between life and death 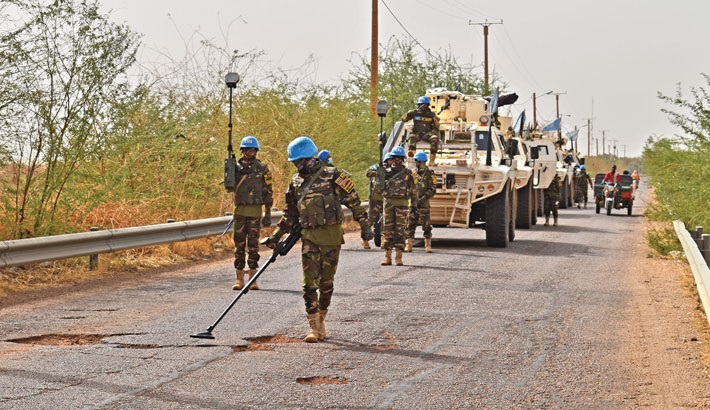 The UN mission in Mali is currently marked as the most dangerous peacekeeping mission in the world where peacekeepers have the highest mortality rate. To keep team members safe, the members of the search and detect team is at the forefront. During an operation, search and detect team of Bangladesh Army is checking for IED (improvised explosive device) in the Gao region of Northern Mali. —Photo By:- Ahamed Ullah

Major Nur Haque is still haunted by fear as he was very close to death while conducting the ‘Operation Mongoose’ on the soil of Mali last January.

“I was very close to death, but it went back without hugging me, Alhamdulillah,” said Major Nur Haque, a member of Bangladesh Army working in the United Nations Multidimensional Integrated Stabilization Mission in Mali (MINUSMA).

“Around four months ago, I was in an operation titled ‘Operation Mongoose’ and my life was in great danger. It can be said I gave up hope of coming back alive.”

He also said: “In Africa, I have been fighting with arms and ammunition while my wife and daughters in Bangladesh have been passing sleepless nights in tension and praying to Almighty Allah for my safety.”

Like Major Nur family, members of every Bangladesh troop stationed in the Saharan country as part of a UN peacekeeping mission, have the same story. All the time their family members are worried about their near and dear ones.

Besides this, when they went out for long operations like ‘Operation Mongoose’ they were unable to contact their family members for 10 to 20 days.

Colonel Zubayer Hasnat, contingent commander of BANBAT-7 MINUSMA, said Mali, a country in West Africa, has been described as the most dangerous peacekeeping mission in the world. In addition to the unfavourable weather, the peacekeepers are being the main target of the terrorists in Mali.

He said, “During any operation none knows what will happen in next minute. Our peacekeepers are always in the midst of life and death.”

Some 12 Bangladeshi peacekeepers have lost their lives in Mali so far since 2013.

Since December 2020, terrorist activities have increased alarmingly in the central region of Doyenza and its environs, and security of civilians has severely been disrupted.

At this time, the force headquarters requested to send a company of BANBAT-7, a contingent of Bangladesh Army has been in peace keeping mission in Gao Province of Mali, to the conflict zone 400km away on an emergency basis in order to strengthen the MINUSMA in Center Sector and control the situation quickly.

It is to be noted that a company was sent there by BANBAT-7 in recognition of the Bangladesh Army’s final commitment to peacekeeping, despite a severe lack of logistical and intelligence information to conduct operations in the completely unfamiliar and high risk area.

Major Nur, who is the Company Commander of Mechanized Company of BANBAT 7, said when the operation team reached Dalla-Nokara, about 350km west of BANBAT camp, on January 27, 2021, terrorists attacked the convoy with a Remote-Controlled Improvised Explosive Device (IED) blast.

The BANBAT operation team with endless bravery also retaliates and resists terrorist attacks and forces them to flee. A total of three people, including the driver of the LAV (Light Armored Vehicle), were injured in the blast.

Of the injured, driver Mustafiz is still undergoing treatment at CMH in Dhaka.

In the aftermath, the operation team assisted in improving the situation by setting up a temporary operation base in the area and conducting regular patrols. “Overall, the bravery and professionalism of the members of BANBAT-7 in “Operation Mongoose” was appreciated by the MINUSMA leadership as well as at the highest level of the Bangladesh Army and widely acclaimed at the headquarters of peacekeeping operations in New York,” said Colonel Zubayer, also the country senior (Bangladesh) in MINUSMA.

He said, “We have to take this peacekeeping program forward by overcoming many kinds of adversities. In fact, this challenge is constant. There is multidimensionality to every challenge. In each field, there are different challenges. That could be environmental. Different terrorists’ organizations may have IED attacks.”

Colonel Zubayer also said, “We feel that we have achieved this success because of our professionalism, love of work, winning the hearts of the local people and operational involvement.”

Senior Colonel Zhu Jinsong, sector east commander in Mali, said, “The security situation in Mali, specifically in our area of responsibility, is really challenging, unstable and unpredictable. The peacekeepers of MINUSMA and government forces are becoming the main target of the terrorists in Mali.”

“I would like to mention about BANBAT. Every time when they were tasked, they were executed all the jobs in an utmost professionalism,” he added.