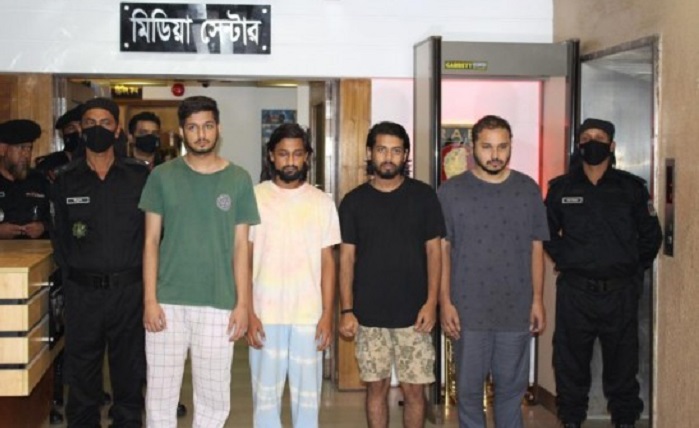 Yet another hallucinogenic drug named Dimethyl Tryptamine (DMT) has first ever been discovered in the country.

Several teams of Intelligence Division of RAB headquarters and RAB-2 arrested four drug dealers with 600 milligrams of the DMT from Tejgaon in the capital around 11:30pm on Saturday. The force members also seized 40 blots of Lysergic Acid Diethylamide (LSD) and 62 grams of American cannabis from their possession.

The arrestees are Syed Mainuddin Ahmed alias Shadab, 29, Abraham Junayed Taher, 25, Swapnil Hossain, 22 and Simion Khandaker, 23. They are the students of universities at home and abroad.

The RAB officer Khandaker Saiful Alam said that the recovery of the DMT is for the first time in the country.

He said that like the LSD drug, the DMT is brought from abroad via courier services and its use is limited in the rich class people for its high price.

The DMT can be taken through breathing and injection, he said, adding that it creates heavy addiction for 30 to 40 minutes after taking. One begins to feel hallucination and s/he enters in the world of imagination, the officer explained.

On the bad effects of the drug, he said that the addict may face accident or die for taking the dangerous drug.

According to the officer, the arrested Shadab passed O Level from an English medium school at Uttara in the capital and went to Darjeeling in India in 2013 for doing A Level course.  After passing A Level, he went to Thailand in 2015 for studying in BBA. During the study in Thailand, Shadab addicted to the DMT and the LSD drugs with some of his friends and classmates of the foreign country. After returning to the country, he could not give up taking the drugs.  He used to bring the drugs from abroad through postal services and took, and sold those among other people.

Taher passed O Level from an English medium school in the city and went to Malaysia for doing A Level course.  He stayed in Malaysia from 2015 to 2016. After that, he went to the United Kingdom (UK) for higher education.  In  the UK, he addicted to the DMT and the LSD.  He returned to Bangladesh in 2020 after passing MBA from the UK, but could not give up the addiction to the drugs. He brought the drugs through postal services and took, and sold those with other people.

Swapnil and Simion also took the drugs and supplied those with the other people.

The officer said next legal action against the arrestees is underway.

On May 26, the Detective Branch (DB) of police arrested three private university students and seized 200 blots of LSD from them. Police then said that it was the first time that they seized the LSD drug in the country. But the Department of Narcotics Control (DNC) said that they seized the LSD several years ago, which was the first recovery in its form.