Scuba diver finds message in a bottle from 1926 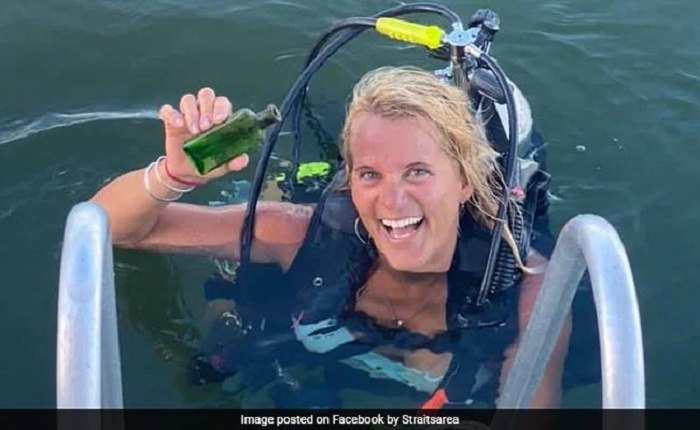 Imagine finding a message someone wrote for you nearly a century ago. Fascinating, right? And this isn't a movie we are talking about. What's even more fascinating is the place where this message was found— deep into a river, inside a green-coloured glass bottle. Jennifer Dowker, a scuba diver who owns a boat tour company, found the green bottle with the message written in 1926. “Will the person who finds this bottle return this paper to George Morrow Cheboygan, Michigan and tell where it was found?” read the note on a piece of paper inside the bottle.

Ms Dowker, who owns tour company Nautical North Family Adventures, returned to the deck and took a few pictures of the treasure she had found in the deep waters of the Michigan river. Posting the pictures on the official Facebook handle of Nautical North Family Adventures, she wrote, “So, look what I found when I was washing windows (and cruising along with the fish)... any Morrows out there know a George Morrow that would've written this circa 1926? COOLEST night diving EVER.”

A night after she posted the message and pictures, it went viral on social media. At the time of writing, over 113k people had already shared the post.

The post also received an overwhelming response from people, with some finding it “incredible”, while others said it brought a smile to their faces.

Talia Rothfleisch Haley commented on Facebook, “This is an incredible find! I'm curious though how it was wrapped to conserve the ink for that long?? So cool!”

“If nothing else, this post has brought together a whole lot of people named Morrow! And that makes me smile,” wrote Torry Fournier Ruddell.

Many were excited about not just the bottle and the message but also if the story had a happy ending. Take this comment for example.

“This is so cool. Please keep the story going. Would love to hear the final chapter. Very interesting,” wrote Patricia Adams

Ms Dowker also posted an image of the letter on Instagram and captioned it, “Who's ready for scuba? Look at this amazing find after cleaning windows.”

Ms Dowker spotted the bottle on June 18 when she was scuba diving in the Cheboygan River to clean the windows on the bottom of her boat. Even though the bottle was filled 3/4th with water and had a loose cork, Ms Dowker could see there was a paper inside it.

“I thought ‘Oh that's kind of cool' and then I read the word ‘this' on the paper inside the bottle and I thought ‘Wow that is really cool',” Ms Dowker told USA Today.

On Sunday, June 20, the scuba driver was returning from her father's place when she got a call from a woman named Michele Primeau. The 74-year-old woman said that she came to know of the note from another woman, who had seen Ms Dowker's post on Facebook.

Ms Primeau said she received the pictures of the letter over email from the other woman. She added that it was the handwriting of her father, who was born in Cheboygan and lived there until his 20s.

“It was also interesting because he threw the letter in the river in November, and his birthday is in November,” USA Today quoted Ms Primeau as saying. Her father died in 1995.

Now can you guess who gets to keep the note? Well, it's Ms Dowker. Though she wants to return it, Ms Primeau wants Ms Dowker to keep it.

Ms Dowker said that she will get the letter framed in a shadowbox, and Ms Primeau will send more pictures of her father from that time before they display it for people to see.

“I would just want my father's memory to keep on living and want more people to see it," Ms Primeau said, adding, “So, we are going up this summer and we are going to see it first-hand.”