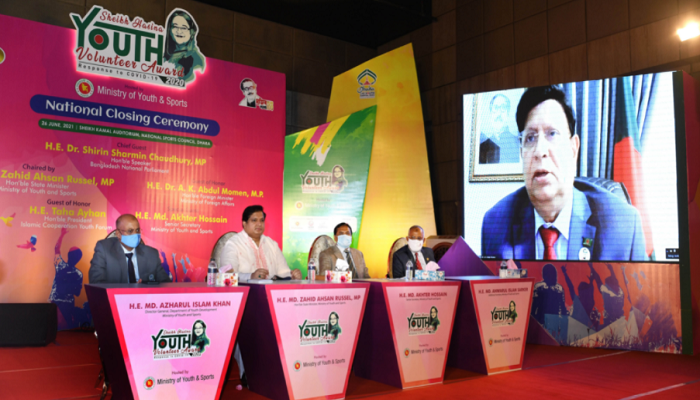 Foreign Minister Dr AK Abdul Momen on Saturday said the government put equal emphasis on the lives and livelihoods of the people from the start getting results during corona disruption.

He said the government announced 31-point directives after the detection of COVID-19 cases in March last year.

"Stimulus packages worth more than 1.24 trillion taka equivalent to around 4.44% of our GDP have been rolled out, the highest in South Asia," Dr Momen said

The Foreign Minister was addressing at the national closing ceremony of "Sheikh Hasina Youth Volunteer Award 2020".

Dr Momen hoped young people will continue their voluntary works even after the pandemic is over.

"This event provides you with the opportunity to create a greater network for volunteering," he said.

Just before the pandemic struck, Bangladesh had achieved an enviable GDP growth rate of 8.15 per cent, said the foreign minister.

Even during COVID-19, Bangladesh achieved an annual GDP growth rate of 5.2%, which is one of the highest in the world during the pandemic, he said.

The UN has estimated that the global economy is expected to lose nearly 8.5 trillion dollars in output over the next two years.

Dr Momen said the pandemic is a stark reminder that our fates are interconnected and that no one is safe until everyone is safe.

"The challenges of today’s world can only be overcome by our self-acting efforts. I believe our young volunteers with their collective and self-acting efforts of actualizing new ideas can bring peace in this world," Dr Momen said.