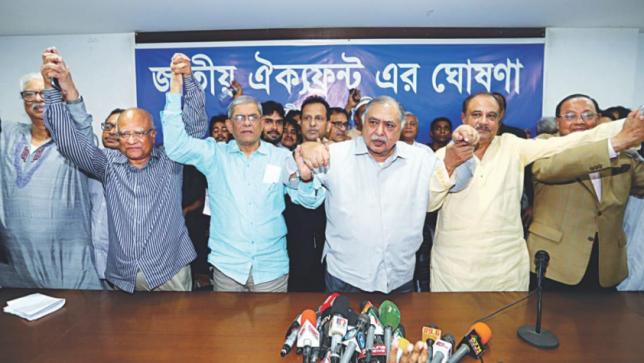 Party insiders said a large number of BNP leaders and activists also want the party to go alone dissolving the alliances in a bid to become self dependent in the country’s political arena.

“The activities of the alliances have remained stagnant due to the Covid-19 pandemic. Even, our party also can’t take to the streets with programmes due to the coronavirus situation and obstruction by the government,” BNP standing committee member Nazrul Islam Khan told the Daily Sun.

After the debacle of BNP in the 11th parliamentary elections, the party has been going alone with its own programmes and avoiding components of the both 20-party alliance and Jatiya Oikya Front while they also did not go for any joint programme with the allies.

BNP insiders said a large number of the party leaders and activists from central to grassroots units blamed formation of Jatiya Oikya Front under the leadership of Gono Forum president Dr Kamal Hossain, a former leader of Awami League, and dependence on other allies, including Bangladesh Jamaat-e-Islami of the 20-party alliance, for failure in antigovernment movement and in the last general election.

Later, under pressure of the party men, the BNP high command chose the path of maintaining distance from its allies of the two political coalitions, including Jamaat, and paid attention to strengthening their own organisation.

The BNP even neither go for any joint programme, nor held any meeting with the 20-party alliance and the Oikya Front, except one or two components, for the last few years, which has made the opposition political coalitions almost dysfunctional.

Talking to the Daily Sun, Oli Ahmed, president of Liberal Democratic Party (LDP), claimed that there is no problem inside the 20-party alliance now but its activities have remained stopped due to the pandemic. “If meeting of the alliance is held sometimes, then it would be better to keep the alliance active,” he added.

Syed Muhammad Ibrahim, chairman of Bangladesh Kalyan Party, another ally of the alliance, said, “It seems that the BNP is not interested in going for any joint programme of the alliance now.”

Jatiya Oikya Front steering committee member Mahmudur Rahman Manna, also convener of Nagorik Oikya, said, “The Oikya Front is now almost dysfunctional as there is no programme or meeting of the coalition for long.”

The 20-party alliance had failed to realise their demand of holding the general election under an election-time administration and so, they had boycotted the 10th parliamentary polls held in 2014.

Later, the BNP formed Jatiya Oikya Front with Dr Kamal Hossain at the helm but they again had failed to realise their demands and faced a debacle in the 11th parliamentary polls on December 30, 2018.

Even BNP failed to ensure the release of party chairperson Khaleda Zia from jail. However, she was later freed conditionally upon an executive order of the government.

Though the 20-party alliance and Jatiya Oikya Front still exist, these two political coalitions have become dysfunctional, as BNP is carrying out its own political activities on a limited scale amid the pandemic.

Talking to the Daily Sun, some central BNP leaders said their party is now eyeing alternative ways to ensuring people’s participation in their movement against the incumbent government.

However, seeking anonymity, a BNP central leader told the Daily Sun: “Actually, BNP didn’t gain anything by forming the Jatiya Oikya Front. On the other hand, most of the components of the 20-party alliance and Jatiya Oikya Front are one-man political party and have no organisational strength to wage movement.”

Another central leader of the party said in the absence of Khaleda Zia and her son Tarique Rahman, BNP became almost dependable on some leaders of Jatiya Oikya Front and Jamaat of the 20-party alliance to make the antigovernment movement policy, almost forgetting the party’s own strength.

“However, the party high command is rethinking the strategy and has taken decision to strengthen the party, instead of depending on others and that’s why, the party is avoiding alliances,” he added.

A senior leader of the BNP said they have been maintaining distance with the ‘controversial’ Jamaat-e-Islami and trying to regain their own organisational and political strength to wage anti-government movement and to prepare for the next parliament polls.

Talking to the Daily Sun, a number of the BNP leaders at the central and grassroots units said the party should cut relationship with the Islamist organisation Jamaat and forge a greater political alliance with all opposition political parties of the country, instead of several alliances.

They also said the party has to complete its reorganisational process and hold its national council session to form new committees for a strong organisation.