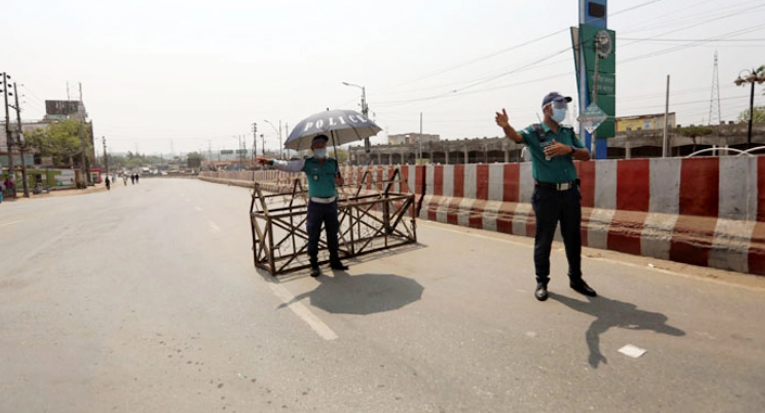 In the wake of a massive surge in coronavirus infections, the government is going to impose a complete nationwide lockdown for a week from Monday.

All government and private offices will remain closed while operations of public transport suspended during the period, said a PID handout on Friday.

Emergency vehicles, including goods-carrying trucks, ambulances and vehicles engaged in emergency medical services and media people, will be kept outside the purview of the restrictions.

No one will be allowed to venture outside without any emergency.

A detailed notification on the lockdown will be issued by the Cabinet Division today.

The corona curbs will remain in force for a week to prevent the spread of the deadly virus which has so far infected 878,804 people and killed 13,976 of them in Bangladesh since the first three cases were reported on March 8 last year and the first death was registered 10 days later.

The country on Friday reported 108 virus-related deaths, 2nd highest daily toll since the pandemic. Record 112 deaths linked to the virus were registered in the country on April 19 last.

Earlier, the National Technical Advisory Committee on Covid-19 recommended that a nationwide shutdown be imposed for at least two weeks to stem the surge in coronavirus cases.

The panel made the suggestion from a meeting held on Wednesday night, according to a press release issued on Thursday.

Though the press release did not clarify what the shutdown means, committee chief Prof Dr Shahidullah said it meant a strict lockdown when no offices except emergency services would be allowed to operate.

The panel of experts made the recommendation as it thinks the worsening coronavirus situation cannot be controlled without a nationwide shutdown.

Later in the day, State Minister for Public Administration Farhad Hossain told the media that the government was observing the situation and working accordingly. “We’ve taken necessary preparations as we’re assuming that we need to take such measures onwards,” he said.

He had also said the authorities might impose a countrywide shutdown anytime. The state minister said a lockdown had already been imposed on seven districts around and near Dhaka with the situation steadily deteriorating in the border areas. “So, the government is ready to reach a decision anytime. We’re closely observing the situation and the shutdown may be imposed more strictly than it was last year,” he said.