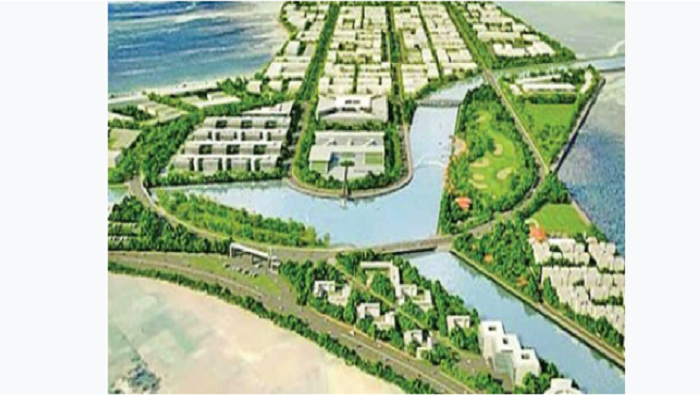 He mentioned that the strategic location of BSMSN along the Dhaka-Chattogram Highway and advantages of being an ocean-front economic zone  motivated the Bangladesh Economic Zones Authority (BEZA) to dream in a bigger canvas.

Talking to journalsts, BEZA Consultant Md Abdul Quader Khan said Bangladesh is one of the fastest-growing economies in the world, even during the COVID Pandemic.

“With increasing economic prospects and industrialization, migration of rural population to urban areas has become the country’s biggest challenge as the existing urban areas are becoming more concentrated. With a density of 47,400 people per square kilometer, Dhaka remains the most densely populated city on earth,” he added.

By 2035, he said, nearly 110 million people, about half of its total population, are expected to live in urban areas; currently, more than 60 percent of Bangladesh’s urban population is concentrated mainly in four metropolitan cities– Dhaka, Chattogram, Khulna, and Rajshahi.

Given this pace of urbanization, he said, Bangladesh is likely to face challenges in meeting the needs of its growing urban population in terms of housing, transportation, energy and other infrastructure along with employment and other universal services.

Abdul Quader Khan, also a development worker and consultants for environmental and social development, said a smart industrial city, to address the woes of urbanization, can be the perfect panacea.

“It propels the growth of an economy and spurs its development. It addresses the immediate need to provide adequate urban infrastructure, meets the needs of present and future generations with respect to economic, social and environmental aspects using ICTs and other means to improve quality of life, the efficiency of urban operation and services and competitiveness,” he added.

He mentioned that smart industrial cities are known to leverage technological advancements using the Internet of Things (IoT) platforms to monitor city infrastructure, overseeing everything from traffic flows, parking, water and even air quality, and using the resulting data to handle long-term planning around environmental sustainability.

He said that BSMSN has been conceptualized to be built on a contiguous land of 33,000 acres, adjoining the Upazilas of Mirsarai, Sitakundu of Chattogram district and Sonagazi of Feni district.

In future, this city can be extended up to Companiganj Upazila of Noakhali district and Sandwip Upazila of Chattogram district, he added.

He opined that instead of focusing only on the concept of economic zone, BEZA decided to utilize this massive project area in such an unprecedented approach that will transform the entire economy of Bangladesh, as well as improve the overall quality of life attracting businesses and citizens to settle in.

This industrial city will be the 3rd largest and 1st planned smart city of the Bangladesh, he added.

The primary goal of the master plan is to ensure that critical infrastructure is economically sustainable and public services are interactive, transparent and responsive, he added.

He said BSMSN, the first planned city of the country, will pave the way for establishing a truly world-class business and industrial centre.

It is expected to create employment opportunities for 1.5 million people within the next 15 years and ensure US$25 billion export from this industrial enclave, he added.

He said the city has started attracting leading companies from around the world to start manufacturing for domestic and export market.

“Local companies, considered as giants, have also begun establishing factories to commence their operation in the city. It is expected that various types of industries, such as garments and its supporting industries, agro-products and agro processing products, integrated textiles, leather and leather goods, shipbuilding, motorbike assembly, food and beverage, paint and chemical, paper and products, plastics, light engineering (including auto-parts and bicycles), pharmaceutical products, power and solar parks will be set up in the industrial city,” he added.

Though the industrial city is in the development stage, he said, BEZA has already allocated about 8000 acres land among the 152 business houses and their proposed investment is around $22.5 billion.