Never worry about any 'debt trap': Beijing to Dhaka 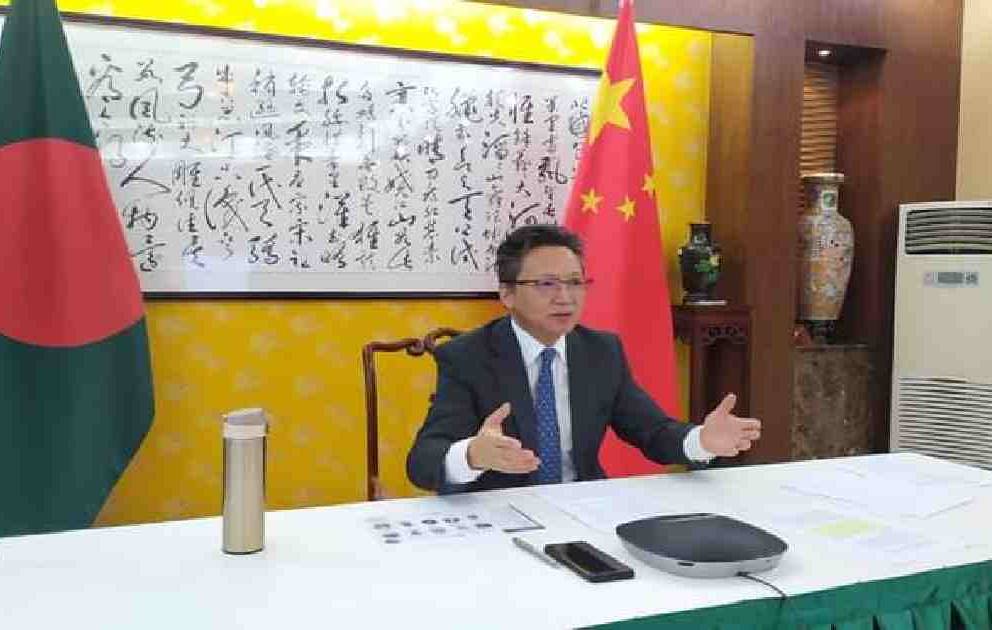 “I would say that you’ve managed foreign debt very, very well, and there’s no such bad debt so far at all. You’ve earned a very, very high credit (recognition) internationally in terms of (managing) international debts. So, never worry about that,” Ambassador Li said.

He made the remarks while responding to a question at an online symposium titled “Bangladesh-China Relations: Prognosis for the Future” hosted by the Cosmos Foundation and premiered on its Facebook page on Thursday evening.

The example of Sri Lanka came up in the context of a country that fell into a “debt trap” as a result of public investment projects financed by China.

Ambassador Li, who delivered the keynote address at the symposium, however said there is no proven evidence that China created any 'debt trap' in any country, including Sri Lanka and Bangladesh.

“I think you’ve an excellent system and you’ve excellent officials and ministers to take care of that. So, never worry about that,” said the Ambassador.

Referring to an article he read regarding Sri Lanka's debt situation, the Chinese envoy said the total Chinese debt accounts for only less than 8 percent of the whole debt of that country and of this 8 percent Chinese debts, much less is related to the Belt and Road projects.

The Ambassador also said there is government to government debt, which is normally a soft, concessional loan with a very low interest and for a very long period of time.

Dr. Debapriya of CPD said China has emerged as a big financial investor in Bangladesh involving major projects and those projects have major infrastructural implications.

Now there is a debated issue across the world whether this kind of financial flow is a ‘debt trap’ for the countries like Bangladesh as it happened in Sri Lanka, he said.

“Thankfully, Bangladesh’s external debt remains moderately manageable and most of the country’s debts are from the multinational agencies and at this moment it is not China,” said the economist.

Dr. Debapriya, however, said they should be really mindful about the debt repayment issue although they are in a comfortable position at this stage. Bangladesh's total outstanding debt burden is well under 40 percent of GDP.

“But there are projections that this debt issue would be a challenging point for the Bangladesh-China relationship beyond 2024,” he added.

Ambassador Li said the two countries -- Bangladesh and China -- need to advance the Belt and Road Initiative (BRI), noting that there is no doubt that closer cooperation under BRI will strengthen Strategic Partnership of Cooperation.

Bangladesh is the first South Asian country to sign up for BRI, which was first proposed by President Xi Jinping in 2013.

He said the Karnaphuli Tunnel Project, the first underwater tunnel project in Bangladesh and in South Asia, has achieved a “breakthrough” with the completion of its left line; the Bangabandhu Bangladesh-China Friendship Exhibition Centre, the largest of its kind in the country so far, has been handed over to the government of Bangladesh; the completion of Padma Bridge, the “dream bridge” of the Bangladeshi people, as well as its railway link, is also within their reach.

Statistics show that the accumulated infrastructure construction contract volume between our two countries has reached 72.6 billion dollars by the end of 2020, said Ambassador Li.

He mentioned another BRI project - the Project of Expansion and Strengthening of Power System Network under Dhaka Power Development Corporation Area.

Bridge between India and China

The Chinese Ambassador emphasised that China had never taken India as a “strategic rival” rather they considered India a good neighbour of China.

“I would say, we never take India as a strategic rival. We still hope that the China-India relationship can be improved. So, never imagine that China would like to have any hostile or rival attitude to India. That’s not the case,” said the envoy, mentioning a number of platforms where the two countries are working together. “We’re still working very, very well together, very closely.”

He, as the Chinese Ambassador to India’s neighboring country - Bangladesh, hoped that this China-India relationship would be improved more in the future.

Historically, Ambassador Li said, they have more than 2000 to 3000 years of good relationship with India, and any Chinese intellectual like himself has a special feeling for Indian culture.

“Any Chinese intellectual, who is well-educated, would have a special feeling. A good feeling, towards India – that’s something untold publicly probably,” he said.

Enayetullah Khan fondly recalled interviewing the present Chinese Foreign Minister Wang Yi in Beijing back in 2004 (when he was the Vice-Foreign Minister) when Minister Yi talked about new foreign policy which is good neighborly relations with their neighbors. “I asked, where does Bangladesh stand? His immediate answer was – Bangladesh could be the bridge between India and China,” Khan said, going down his memory lane.

He mentioned that a couple of years ago, China was not used to purchasing any garment from Bangladesh, which is the number one export product of Bangladesh.

But these days, he said, a lot of readymade garment products have been exported to China from Bangladesh.

“What happened? Your garment industry has been upgraded to such a higher level, and that’s why China is buying from Bangladesh. That’s just one of the examples that you can tell that a lot of technology transfer is happening between these two countries,” said the Ambassador adding that probably, China and Bangladesh can even work together on space technology too in the future.

As one of the discussants raised the Quad issue - the four-country alliance between the USA, Australia, Japan and India, that is seen as anti-Beijing.

The Ambassador took the opportunity to explain what he said on the issue of Bangladesh possibly being invited to join, at a particular programme.

“As an Ambassador to Bangladesh, the first foreign policy lesson I learned is that Bangladesh adheres to the idea of "friendship to all and malice to none." So, I’ve full confidence that Bangladesh won’t be part of that small clique,” he said.

“But when I was asked if you would like to see or do you think this is a good idea for Bangladesh to do so, of course, I would say no. What else can you expect from me? Should I say yes? That would have been ridiculous. So that’s the story about Quad,” Ambassador Li added.

“I would say please, make a more complete feasibility study report, and only after that, we can start to assess it to make an evaluation,” said Ambassador Li.

He said they also have to make some feasibility studies - economically, environmentally and even geopolitically.

“But unfortunately, till today, there's nothing new yet. If, as some guessed, China should be excluded from this kind of project - that's okay for us, as we were invited, we weren’t trying to persuade the Bangladesh government. No, that's not the case here,” Ambassador Li added.