Video of elephant enjoying her bath time is winning the internet 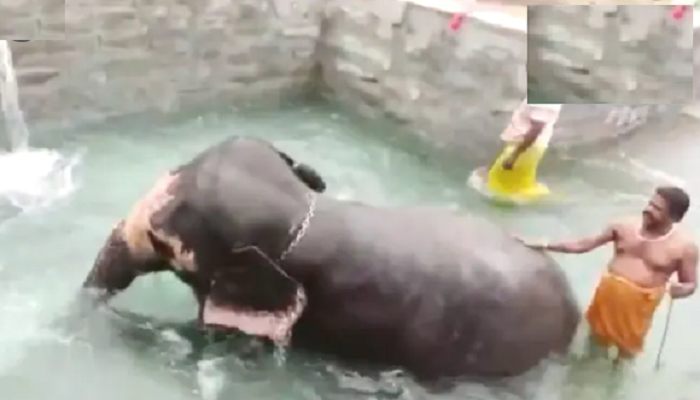 A video of an elephant enjoying a dip in a temple pond in Tamil Nadu went viral within hours of being uploaded on social media.

Akila, the elephant at Tamil Nadu's Jambukeswarar Akhilandeswari temple, was caught on camera frolicking in the water while she was being given a bath.

The video was shared on Twitter by news agency ANI. "Elephant Akila beats summer heat at the newly constructed pool in Trichy's Jambukeswarar Akhilandeswari temple, as she plays in the water while being bathed," the accompanying caption read.

It soon became a favourite among users of the micro-blogging site, who actively reshared the video. It received over 35,000 views so far.

Akila's infectious energy caught on with many users who described the video to be the "happiest thing on the Internet".

Reacting to the post, one user said, "Just too adorable." Another said, "Could watch this all day."
Summing up what most people felt, another user said, "Is this the cutest thing on the Internet today or what?"

In a similar video that caught the Internet's attention recently, a bear in Connecticut, USA, chose to deal with the heatwave in the area by taking a dip in the kiddie pool. Not only was the bear caught on camera enjoying a swim, but it was also seen playing with the rubber toys that were floating in the water.

Tell us what you think of the cute video of Akila having a fun time in the pool.