Removing Teddy Roosevelt's statue is the worst kind of pandering 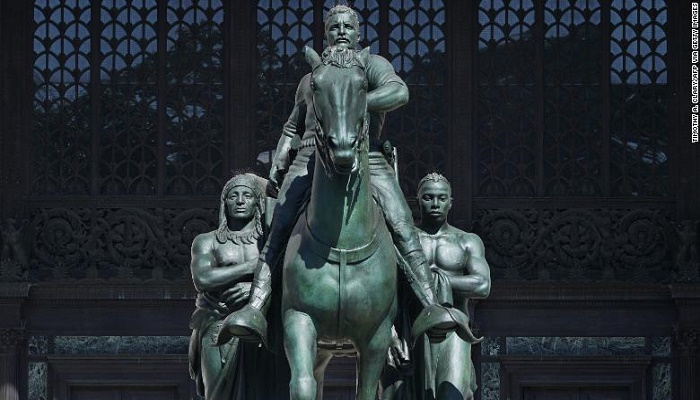 In life, he was a Bull Moose. Over one hundred years since his death, however, President Teddy Roosevelt is being bullied himself by woke activists who seek the erasure of some of America's greatest icons and political leaders.

Monday's decision by officials in New York City to remove the iconic equestrian statue of Teddy Roosevelt from the front of the American Museum of Natural History (the board of which called for its removal last year) is the worst kind of pandering. Getting rid of the Rough Rider does nothing to advance the cause of racial harmony, but it does serve the goals of those who believe America is an irredeemable, racist nation that must be torn down.

When this national statue removal madness started, we were assured advocates were just after the Confederates. Why are we honoring traitors, they asked?

Since last summer, though, we see the plan to erase American history goes much deeper. Washington. Jefferson. Lincoln. Grant. And now Teddy Roosevelt -- previously a progressive icon! -- have fallen. None were Confederates, but they do represent powerful links to America's founding and its momentum toward becoming the greatest country the world has ever known.

That's the rub for the protesters -- you can't tear down a country without tearing out the roots of its founding and momentum.

I agree that Confederate statues shouldn't hold places of honor in America's government buildings, and was among the first Kentucky Republicans to call for the removal of Confederate President Jefferson Davis (a native to the Bluegrass State) from our state capitol -- something that finally happened in 2020. Davis should live in a museum, where we can learn about his treachery and traitorous behavior.

But why should Teddy Roosevelt or the other non-Confederate American leaders befall the same fate? Roosevelt was no Confederate. He was an American hero, a bold symbol of our nation's exceptionalism. He lived life to the fullest. He represents the best of us, not the worst.

The statue's detractors say it is a racially insensitive depiction, with Roosevelt sitting on horseback above a Native American and an African. The NYC Parks chief of staff says its composition "visually supports the thematic framework of colonization and racism; a statement from the New York City mayor's office says that "it explicitly depicts Black and Indigenous people as subjugated and racially inferior."

These sorts of statements must thrill the anti-statue protesters, as they roam the countryside looking for racism in every nook and cranny of American life. To a box of hammers, the entire world is a nail.

But to the rest of us, it just sounds out-of-touch, a blatant attempt to denigrate someone who deserves to be remembered fondly instead of as some irredeemable monster. He's not here to defend himself, so the weak-kneed politicians are more than happy to sacrifice him on the altar of wokeness.

A close look at the statue, though, shows three bold men (the guides are carrying guns, for goodness sakes!) working together. Where the politicians see two men being subjugated, I see three proud people working in tandem to unite a world regardless of our distinct differences.

The figures accompanying Roosevelt are composites -- not specific individuals. And they are guides meant to symbolize "the continents of Africa and America, and if you choose may stand for Roosevelt's friendliness to all races," sculptor James Earle Fraser said in 1940.

They aren't servants or subjects; they are vital parts of the scene who could have been just as important to any of Roosevelt's adventures as Teddy himself.

But let's be honest -- this has nothing to do with race, and everything to do with a woke movement probing the boundaries of what they can get away with. The broader agenda appears to be to radically and fundamentally change America from a nation built on the shoulders of giants like Roosevelt, Lincoln, and our Founders, into something much less free -- and far darker when it comes to free speech.

But that's hard to do to a country with a strong sense of itself, its history, and the icons who created it, built it, fostered its momentum, and ultimately made it the greatest power in the world.

Naturally, the easiest way to convince people that America is racist and rotten at its core -- and therefore deserves to be torn down and rebuilt some other way -- is to denigrate and tear down the heroes who came before us. Teach the children visiting the museum that people like Roosevelt are villains instead of heroes and you can teach them to stop believing in the bedrock ideals that make our country great.

This movement didn't stop with the Confederate statues, and it won't stop with the Founding Fathers or Teddy Roosevelt. The march to erase American history will continue until someone or some group is bold enough to put a stop to it, recognizing the woke, anti-American plot for what it is.

It was too much to ask to find that courage in New York City, it seems, but hopefully enough exists elsewhere to preserve the history of actual Americans who made this country great and who serve as a vital underpinning of what it means to be American, and, fundamentally, a force for good in this world.

I used to hold a membership at the history museum, but I let it lapse last summer because of this pandering. A history museum is supposed to honor our history, not take part in erasing it.