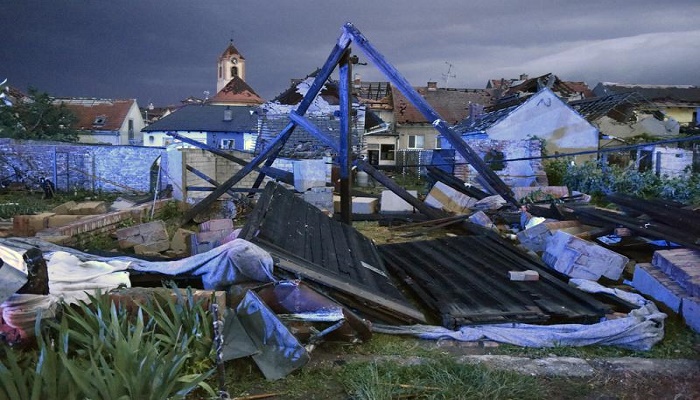 At least three people died and dozens were injured after a rare tornado razed houses to the ground in the Czech Republic's southeast, rescuers said on Friday.

She said 63 injured people had been taken to hospital, 10 of them with serious injuries.

"But there will be more because we are now transporting people who suffered injuries at night and called us later," Kropackova added. Rescuers were still searching under the rubble in some places.

Austrian and Slovak rescuers were helping out and the Czech army was deployed in the region.

The tornado and hail the size of tennis balls struck several towns and villages including Hodonin, where in addition to causing injuries the extreme weather destroyed a retirement home and the local zoo.

A total of 78,000 households and companies were left without power on Friday morning.

The Czech news agency CTK quoted the mayor of Hrusky as saying that half of his village had been razed to the ground.

The storms passing over the Czech Republic forced Prime Minister Andrej Babis to remain in Brussels following an EU summit as a landing in Prague would have been too dangerous.

In neighbouring Poland, a twister struck the southern Malopolska province on Thursday, damaging roofs and injuring one person according to local media.

Tornadoes are rare in the Czech Republic, with the last notable one dating to 2004 when around 50 houses were damaged in the eastern town of Litovel.