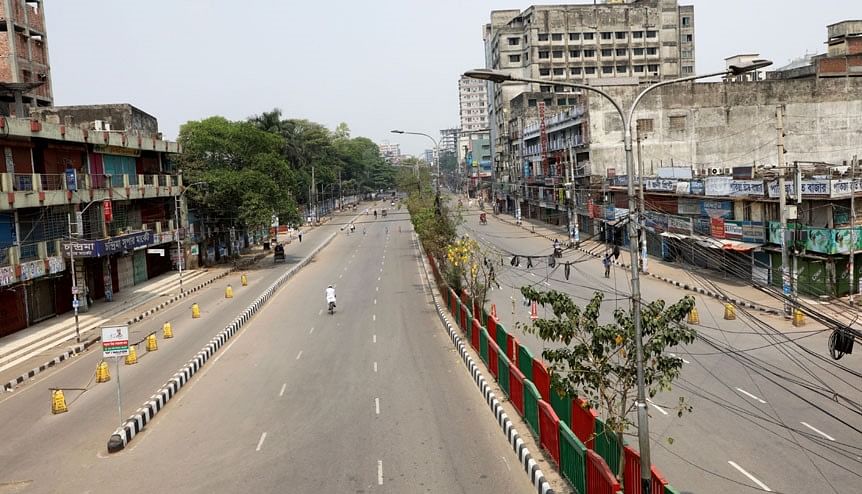 The National Technical Advisory Committee on Covid-19 has recommended that the government should impose complete shutdown on the entire country for at least 14 days in a bid to stem the surge in coronavirus infections.

The recommendation came from the 38th meeting of the committee held on June 23, according to a press release issued on Thursday.

The committee made the suggestion as both deaths and infections from the virus continued to rise in the country amid a World Health Organization (WHO) report that around 62 per cent or at least 40 districts of the country are at high risk of coronavirus transmission.

During the last 24 hours till Thursday morning, 81 virus-related deaths and 6,058 new cases were reported in Bangladesh.

The daily case tally was highest in 73 days as 7,201 cases were registered on April 12.

The committee said the community transmission of highly contagious Delta variant has occurred in the country and it has fuelled the spike in infections.

Citing the Directorate General of Health Services (DGHS), it said over 50 districts of the country are now witnessing a high virus infections.

The national committee also said the "piecemeal" measures taken by the government -- imposing restrictions on different districts to prevent the disease -- have raised questions about their effectiveness.

The committee members said they had a discussion with top Indian experts to know their experience of the latest spike in transmission and lockdown in India. “The experience of other countries, including neighbouring India, says it is not possible to curb the virus spread without strict measures. The coronavirus transmission came under control in places where complete shutdown was imposed as per their (Indian experts) opinions.”

In the current situation, to prevent loss of people's lives, the committee unanimously recommended complete shutdown for at least 14 days across the country as the transmission has gone out of control.

“Except emergency services, it’s needed to keep everything, including transport services, offices and courts, closed (during the shutdown). Or else, the health system will be insufficient, no matter whatever preparations we have,” the national committee said.

Meanwhile, State Minister for Public Administration Farhad Hossain on Thursday said the government will actively consider the recommendation of the National Technical Advisory Committee on Covid-19 for imposing nationwide shutdown for at least 14 days. “We have also necessary preparations to this end,” he added.

According to the DGHS, the national death tally from the virus has reached

Of the 81 deaths, 13 were logged in Dhaka division, seven in Chattogram, 20 in Rajshahi, 23 in Khulna, three in Barishal, five in Sylhet, seven in Rangpur and three in Mymensingh division.

Some 3,230 more patients have recovered from the fatal disease in the last 24 hours, raising the total number of recoveries to 794,783 with a recovery rate of 91.05 per cent.

According to the WHO report available till June 20, around 62 per cent or at least 40 districts of the country are at high risk of coronavirus transmission.

Six districts in Chattogram are at very high risk, three at high risk, and one district is at medium risk.

Meanwhile, hospital sources said 100 per cent of the 41 samples collected in the 24 hours returned positive test in Chuadanga.

Two more people died from the virus during the period, increasing the death toll from the pandemic to 91 in the district.