Citizens in Various Provinces Take Up Arms to Fight Taliban 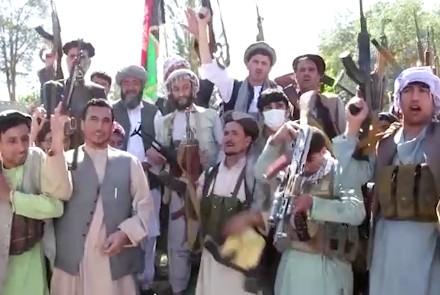 People in various provinces including Takhar, Balkh and Baghlan in the north, Badghis in the west, and Parwan in central Afghanistan, have taken up arms to fight the Taliban amid an escalation of violence by the group.

Public uprising forces commanders in the provinces said they will stand beside the security forces to retake the lost districts. Some politicians said that it is necessary that people have taken up arms to defend the country under the current circumstances.

In Takhar, the Taliban has attacked at least 10 districts. Now some residents have taken up arms to support the fight against the Taliban in preparation for potential attacks in Namak Ab, Rustaq and Kalafgan districts in the province.

“We will never allow the Punjabis, the puppets, to threaten this country,” said Abdul Bashir, the deputy commander of a special forces unit in Takhar.

Officials in Takhar said that government institutions in Rustaq, Kalafgan, Worsaj, Farkhar and the city of Taluqan have fallen to the Taliban.

“You see that we are on the frontlines. Mr. Saadat and the commander of the highway is also here,” said Abdul Khalil Zahid, a commander of public uprising forces.

“We are now in the Chashma-e-Shir frontline (in Takhar). It is not concerning. All Takhar people have been mobilized and are standing with security forces” said Habibullah Mahboob, a Takhar resident.

Meanwhile, Balkh governor Farhad Azimi said that former mujahideen commanders have been mobilized to fight against the Taliban in the province following the fall of the centers of five districts of Balkh to the group.

A former mujahideen commander said that handing over districts to the Taliban is not acceptable and that they are fully ready to support the Afghan forces.

“The move by Badghis residents is a self-motivated action and the main goal is to defend the Islamic Republic of Afghanistan and the security forces,” said Abdul Basir Salangi, an MP from Badghis.

“We fought against the Taliban for years. I assure you that we will prevent the Taliban from recent disturbances in a few days,” said Mohammad Amin Dara-e-Soofi, a former mujahideen commander in Balkh.