Bangladesh is an important ally of the US: Congresswoman Sheila Jackson Lee 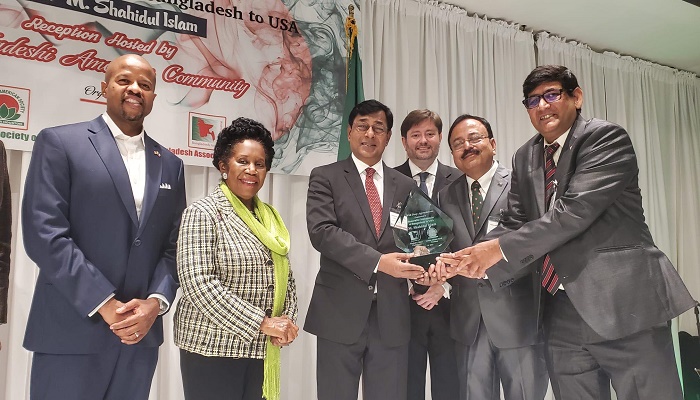 US Congresswoman Sheila Jackson Lee has mentioned Bangladesh as an important ally of the United States and that the two countries enjoy the best of their relationships.

She said this during her meeting with Bangladesh Ambassador to the United States M Shahidul Islam at her office in Houston on June 18, said a press release of Bangladesh Embassy in Washington DC on Thursday ( June 24).

Lee (Democrat- Texas), who is one of the most influential legislators in the US House of Representatives, has also expressed her interest to advance Bangladesh-US cooperation further on wide-ranging areas including trade, commerce, COVID-19 support and Rohingya repatriation to Myanmar.

Congresswoman Lee praised Prime Minister Sheikh Hasina for giving shelter to over one million persecuted Rohingyas in Bangladesh and assured of her continued efforts in the US congress to resolve this humanitarian crisis.

In response to the Ambassador’s request for her support to Bangladesh’s COVID-19 vaccine needs, the Congresswoman promised her help in this regard and hoped that Bangladesh would receive a fair share of the vaccines.

She expressed her willingness to help revitalize the Congressional Bangladesh Caucus to promote Bangladesh’s interest in the US Congress as well as the administration.

She encouraged more people-to-people contact between Bangladesh and the US, and Texas in particular, and shared her idea about establishing a sister-city relationship between Houston and a city in Bangladesh in this regard.

On June 21, Bangladesh Ambassador held a meeting with the Mayor of Houston Mr. Sylvester Turner at the latter’s office.

The Ambassador had a fruitful discussion with the Mayor on advancing cooperation in energy, trade, port management and medical sectors.

They also discussed establishing sister-city network between Houston and Chattogram and agreed that such an initiative would effectively complement our growing economic ties.

Earlier, US Senator Ted Cruz (Republican-Texas) sent a letter of felicitations to the Bangladesh Ambassador welcoming him to Texas and expressing his hope for further strengthening Bangladesh-US relationships.

Senator Cruz also assured of his continued support in the US senate to uphold the US-Bangladesh friendship.