Why female mongooses all give birth at the same time 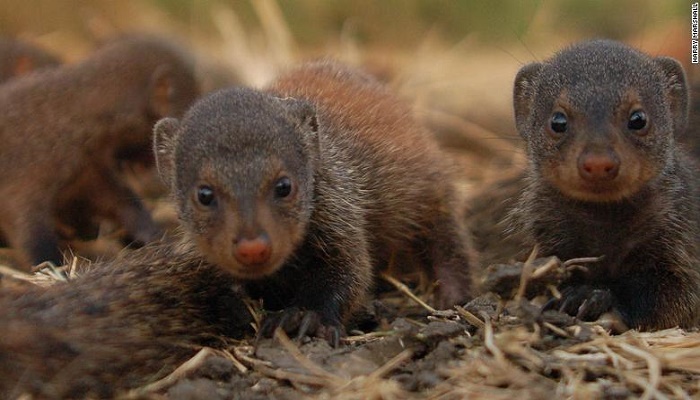 The vast majority of expectant mongoose moms within a group give birth on the same night. The synchronous arrival of the tiny pups makes it impossible to know whose offspring belongs to which mongoose.

At first glance, it doesn't sound like the best approach to parenting -- but researchers in the United Kingdom say this is a good thing and may even shed light on how the concept of fairness evolved.

The fact that virtually all the mammals give birth at the same time creates what researchers call a "veil of ignorance," and this means that the parents give equal care to all the mongoose pups -- giving a group's communal litter of up to 20 pups -- a better shot at survival.

"In most of the natural world, parents favor their own young," said Harry Marshall, a senior lecturer of zoology at the University of Roehampton, in a news statement.

"However, in banded mongooses, the evolution of remarkable birth synchrony has led to the unusual situation that mothers don't know which pups are their own, and therefore cannot choose to give them extra care."

The researchers studied the behavior of seven groups of banded mongooses, small catlike creatures with dark bands on their back that are found in some parts of Africa, in Uganda. Half of the pregnant moms in each group were given 50 grams of cooked egg each day, while the other half were not given extra food.

The mongooses that were given the extra food gave birth to bigger offspring than those that didn't, but those differences in body weight didn't persist as the mongoose moms gave extra care to the smaller pups.

"This ignorance over relatedness to pups is key. Our study tests and finds support for the theory that, where such ignorance exists, individuals should choose to invest in the poorer offspring and 'level them up.' They do this because, as far as they know, this poorer quality offspring might be their own," Marshall and study co-author Michael Cant, a professor of evolutionary biology at the University of Exeter explained in an email to CNN.

"Our study shows that fairness can evolve in animal societies, and is not a concept restricted to humans."

The researchers said that the mongoose moms suckle all the pups in their underground dens for a month, without any discrimination, and pups feed from many different moms. Once the pups emerge from the den, they form one-to-one caring relationships with adults, called escorts, who can be any adult male or female.

They feed and protect the pup in their care until it can find food for itself at around 90 days old.

"Escorts individually recognize and preferentially respond to the calls of 'their' particular pup and actively seek out their pup if it becomes separated or lost," said the study, published on Wednesday in the journal Nature Communications.

"Pups, for their part, aggressively defend access to their escort and beg continuously for food."

The study said it was the synchronous birth that was the key to the success of the extreme teamwork because on the rare occasions that mongoose moms don't give birth at the same time, females kill the pups of other females rather than care for them.

It's not known exactly how the mongooses orchestrate reproducing at the same time -- sometimes it can involve as many as 12 female mongooses. One hypothesis, Marshall and Cant said, is that dominant females produce a pheromone that acts as a cue. However, as birth happens in an underground den it has not been possible to observe the synchronized arrivals.

"When they don't the litter almost always dies very soon after," they added.