Modi govt plans to revive ‘Vaccine Maitri’ in July-August, but only in neighbourhood 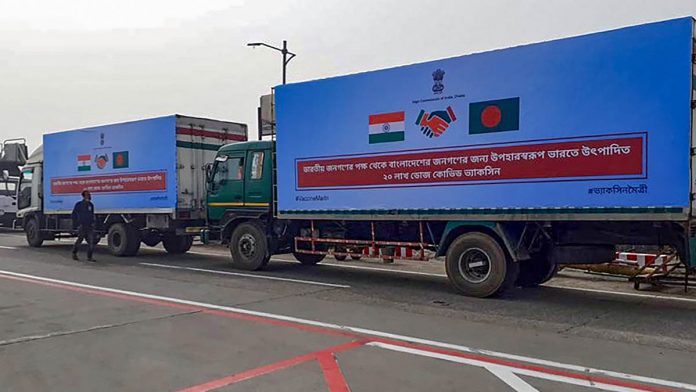 New Delhi: Indian envoys are regularly assuring countries in the neighbourhood that New Delhi is keen to resume vaccine supplies that had been suspended in April, but that prospect could be months away as domestic inoculation is the priority right now, top sources have told ThePrint.

Depending on the scale of production of vaccines within the country, New Delhi is aiming at July-end or August to at least release those vaccines that have been bought by Bangladesh, Sri Lanka and Nepal and are now in pending status, ThePrint has learnt.

The supplies to Bhutan, which received vaccines from India as grants, will be prioritised too.

India, the largest vaccine producer in the world, started sending Covid shots abroad, both as grants as well as commercial shipments, from 20 January onwards under an initiative labelled ‘Vaccine Maitri’. However, as India started facing a vaccine shortage domestically, Vaccine Maitri came to a halt in April. India had shipped over 66 million doses abroad by then.

With the Indian initiative suspended, China as well as Russia have stepped in to offer their Covid shots to countries in South Asia.

After initial hiccups in the domestic Covid vaccination drive caused by shortages, India has launched a policy under which the central government will be the sole public sector vaccine buyer in the country. On the first day of its rollout Monday, over 8 million people were vaccinated against Covid-19.

The boost in numbers has encouraged the Union government to begin planning for the release of the pending Covid vaccines in the neighbourhood.

According to the sources, the Narendra Modi government believes that if India can maintain the record number of Covid-19 vaccinations, it would reach a position by August where shipments to other countries can be resumed.

“If the number of vaccinations that we saw on Monday continues, then the government expects that 40 per cent of the population can be covered by August and we will have a situation when herd immunity will kick in,” said a source. “There are high chances that is when we can safely resume the shipments. It won’t be like before so soon but, of course, for the neighbourhood, we are responsible.”

However, the sources also said that, if and when the exports are resumed, it will only be for the neighbourhood since they are of “topmost priority”, and because some of them have also made payments to procure vaccines from India.

Besides this, sources said, while other countries will get support from the US and other nations, it is the immediate neighbourhood that needs India’s attention. The sources said the vaccine distribution announced by the US will address concerns of the Caribbean and African countries. They added that India believes it is time Europe stops “cornering” the vaccines and begins distribution in a significant way.

According to another official, “no exports will take place unless the domestic vaccinations are really high”.

“It has to be a quick political call. Of course, the idea is to release the paid ones first. But priority now is domestic over exports. A lot depends on how much production we can ramp up,” the official added.

External Affairs Minister S. Jaishankar had said in an interview to Bloomberg Tuesday that he sees India “playing a global role (in vaccine supply)… as the production picks up again”.

When India started its vaccine programme, he said, “we were living up to our obligations with the Covax (WHO-backed initiative for equitable access to vaccines), we were supplying to some of our neighbours”. “Now when the second wave hit us, obviously we looked to purpose the deployment of vaccines primarily at home,” he added, talking about the halt in Vaccine Maitri.

‘Turning to China, Russia in desperation’

Ever since India halted the exports, Bangladesh, Nepal and Sri Lanka have been putting pressure for the release of at least the commercial shipments.

Speaking in Dhaka Sunday, Indian High Commissioner to Bangladesh Vikram Doraiswami said “we hope the problem will be resolved soon…”

“The corona situation in India is still at a dangerous stage. So, we are not yet able to say the exact time of giving vaccines to Bangladesh,” he added.

Meanwhile, China has plans to grant 1 million vaccine doses to Nepal, out of which 800,000 have already been given. The country has also gifted 500,000 doses of Sinopharm to Bangladesh.

Speaking to ThePrint, former foreign secretary Kanwal Sibal said “these countries are turning to China and Russia in desperation … What else can they do? But I expect the production in India to take a jump now that the US has lifted restrictions on export of raw materials. There are about 280 elements that go into vaccine manufacturing and even the US vaccine makers depend on the raw material manufacturing companies to have the inputs. So, it’s a complex situation we are all in.”

He said New Delhi will “have to resume Vaccine Maitri at some point” because India “cannot afford to have the pandemic continue in its immediate neighbourhood while itself keeping safe”.

With India and South Africa batting for a TRIPS waiver on Covid vaccines, he added, it will “fail all logic” if the country itself does not abide by the ethos of equitable distribution in vaccines.

“We, legitimately, have to make it available to the neighbourhood, there can’t be two ways about it,” he added.

Last year, India and South Africa jointly made a proposal at the World Trade Organisation (WTO) to waive intellectual property and patent rights on Covid vaccines and medicines. Formal negotiations on this are expected to begin soon after both countries submitted a revised proposal to the Geneva-based WTO last month.

These IPR and patent provisions are laid out under the Agreement on Trade-Related Aspects of Intellectual Property Rights, also known as TRIPS Agreement of the WTO, that came into effect in January 1995.