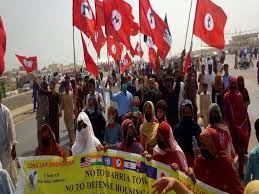 Sindh Action Committee leaders have warned of launching “court arrest” movement and a siege to the Sindh Assembly in the next stage of protest against ‘illegal’ occupation of lands by the Bahria Town Karachi (BTK) and arrests of nationalist parties’ activists in the wake of the June 6 violent protest outside the elite housing society in the city.

The warning came at the culmination of a march from Gaghar Phatak to Thatta Press Club organised by the SAC on Sunday as part of its mass contact campaign to mobilise people for the next stage of the protest movement against the BTK.

The committee head Syed Jalal Mehmood Shah, who is also chief of Sindh United Party, said at the gathering that he wanted to assure people that he and his colleagues would never allow occupation of Sindh’s lands at any cost.

He said that the march was the beginning of a massive campaign against the BTK which, he claimed, was part of a deep-rooted conspiracy against people of the province. The mobilisation campaign would continue in all four districts of the Laar region till June 23, he said.

He said that they had come to people of Sindh to fight their case in an effective manner.

Sindh Taraqqi-pasand Party chairman Dr Qadir Magsi said that ‘massive’ gathering in Thatta had proved that the movement was going to create history and force corrupt rulers and their cronies to undo their anti-Sindh actions.

He said that only people had right to land and resources of Sindh and all forces with evil designs for their motherland would face stiff resistance from people.

Jeay Sindh Mahaz chairman Riaz Chandio said that Sindh’s people were well aware of the conspiracy being hatched against their motherland by corrupt coterie of PPP government and they would not let their ulterior motives to succeed.

He claimed that SUP’s Syed Zain Shah had surrendered to police under a strategy decided by the SAC and that his arrest would be followed by “all of us as part of court arrest movement”.

He said that people of Thatta, who were real heirs of Shaheed Dulah Darya Khan, knew how to defend their beloved motherland like the celebrated general.

Later, Thatta Press Club president of Mohammad Iqbal Khwaja and other office-bearers presented Ajraks to the members of the committee.