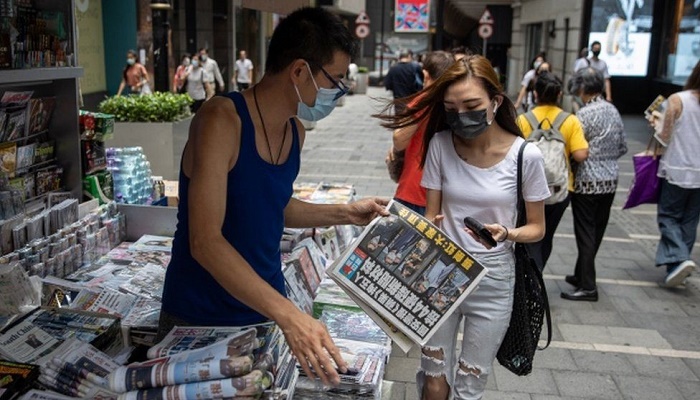 Hong Kong's largest pro-democracy paper Apple Daily has announced its closure, in a blow to media freedom in the city.

The publication's offices were raided last week over allegations that several reports had breached a controversial national security law.

The tabloid has been critical of the Hong Kong and Chinese leadership.

Its founder Jimmy Lai is already in jail on a string of charges.

Board members said said in a statement that the 26-year old paper would publish its last edition "no later than Saturday" and that the digital version would go offline no later than 11:59 on Saturday evening.

The announcement also thanked the readers for their "loyal support" as well as its journalists, staff and advertisers.

Mark Simon, a close adviser of Jimmy Lai, told the BBC that police had disrupted a board meeting earlier on Wednesday and arrested one journalist.

"We are already closing to be honest, but they still had to show up and to make an arrest," he said. "[The police wanted to] influence the outcome of the board meeting… they wanted to make sure [Apple Daily] closes quickly."

It later emerged that a 55-year-old man, identified as an Apple Daily columnist, had been arrested on suspicion of conspiring to collude with a foreign country or foreign forces, local media reports said.

In a press briefing following the raid, police accused the newspaper of publishing more than 30 articles calling on countries to impose sanctions on Hong Kong and mainland China since 2019.

The paper then said it only had enough cash to continue normal operations for "several weeks".

Jimmy Lai, the paper's founder, is currently in jail for a series of charges, including participating in an unauthorised assembly in 2019.

The media tycoon had been one of the most prominent supporters of Hong Kong's pro-democracy movement.

In his last interview with the BBC before he was sentenced to jail, he said he would not give in to intimidation.