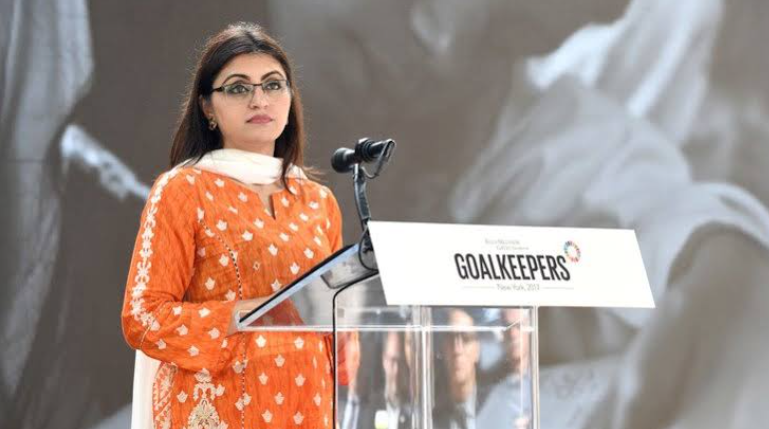 Gulalai Ismail, a leader of the Pashtun Tahafuz Movement (PTM) and women rights activist has just received an award for “escaping imprisonment and torture for empowering women in Pakistan.” The award is given by what its critics describe is a rather unknown organization named The Geneva Summit for Human Rights and Democracy.

As per the organization, the award was handed over to Gulalai during an “annual gathering at UN European headquarters of Human Rights Advocates, dissidents.” However, the award and announcement have not been well received in Pakistan.

As per a Pakistani newspaper, the organization is famous for “obliging people challenging Islamic teaches and values.” The report further highlighted the fact that it is a rather unknown organization with only 4,000 followers on Twitter and without Blue Tick verification.

After the news, PTM leader Mohsin Dawar congratulated Gulalai on the achievement saying, “Truly well deserved. Despite the continued persecution and harassment of your family, you continue to stand strong in your struggle for the rights of our people. Pakhtunkhwa is proud of you. More power to you.” Meanwhile, Ms Ismail expressed the gratitude for receiving the award and said: “I hope it brings more light to our collective resistance against war economy, militarisation and quest for truth and justice.”

It is pertinent to mention that Gulalai formed an NGO for women’s rights named ‘Aware Girls’ to combat violence against women, along with working for sexual and reproductive health rights of women and peace. As per the NGO, Gulalai and her family have been facing persecution from Pakistani authorities. Gulalai went to the US and applied for political asylum in 2019. Meanwhile, her father is in the custody of security forces and has been shifted to jail after the rejection of bail in February 2021.

Gulalai has been a vocal voice against the military and once even claimed that the Pakistani army has raped girls and boys in tribal belt during an operation against militants. These allegations were not received well in the country, especially with the context that a common Pakistani is a supporter of the military. This is why she has been once again criticized for receiving that award.

The majority of Twitterati slammed the activist and the organization over this award. One of the social media users wrote: “Whoever is against Pakistan they award him coz they know they can only undermine Pakistan through traitors but not through fight… and some traitors in cure to be awarded.”

Experts reiterate that this is not the first time it has happened because most of the Pakistanis don’t like criticism against the state, they maintain that it is also true that the authorities don’t like it either. There are a number of cases when the activists and opposed voices have been silenced through force. And these acts make the opposition more prominent as everyone knows about them after such incidents.

Some experts reiterate that perhaps the authorities would be better advised to let them speak because such audiences don’t resonate much among the common masses. They maintain that letting them criticise will not harm anyone, including the state, but using force against them will make them famous.

Furthermore, the international community takes notice and then the Pakistani state faces global criticism. Meanwhile, critics of these activists say they should speak with proof, because giving a statement is easy and gets the attention but proof is always essential. The activists are also urged to focus on the real issues because following a trend-criticizing the state in this case-will not resolve any issue.

“What (Gulalai Ismail) has been saying, however harsh, falls under freedom of expression. But the institution she has talked about doesn’t want to be talked about,” said political analyst Rasul Bakhsh Rais.

Many points towards the case of PTM. The party came into being after police murder of a Pashtun, Naqeebullah Mehsud, in Karachi. He was allegedly killed by SP Rao Anwaar, who is allegedly a right-hand of Pakistan People’s Party (PPP) President Asif Ali Zardari. Observers noted that the PTM was made to protest against the killing, but very quickly it was turned towards opposing military operation in FATA, criticising military operations and the army itself. Meanwhile, Rao Anwaar is now free and there is no apparent justice in the case of Naqeebullah Mehsud, and there is no protest by PTM over the issue. Experts reiterate that perhaps holding a line and focusing on real goal will be a key to success because criticising the state and military alone will not let them win the support of the masses.

(The writer is a journalist)