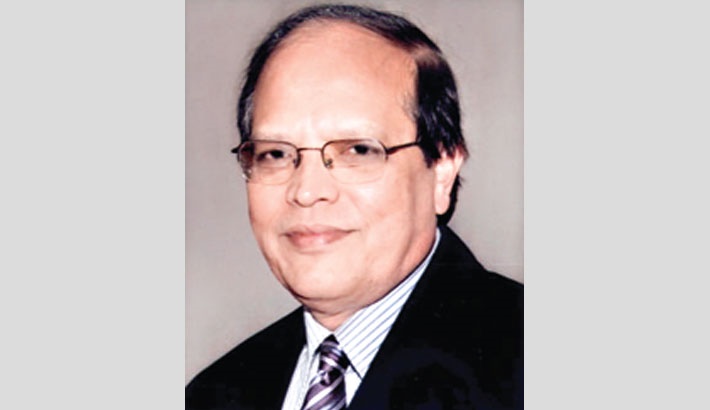 Bangabandhu’s leadership style was both aesthetic and transformational. His very look, behaviour and actions had a sense of beauty and compassion. Thus, he could invigorate his followers and his co-leaders. They were attracted to his charismatic leadership and remained emotionally engaged with the changes he promised.

His quality of aestheticism was deeply rooted among his followers and admirers. Aesthetic Bangabandhu was a sensation rooted deep into their minds, which became further entrenched after his tragic earthly departure. In fact, he has transcended into a symbolic national icon. The very concept of Bengali nationalism was consolidated with the growth of his leadership and his emotional journey with his people, for whom he remains a point of reference.

Rabindranath Tagore in his essay on ‘Swadeshi Samaj’(‘the indigenous society’) was looking forward to a leader who would become the point of defence for the people in times of both prosperity and struggle. Fortunately, there came Sheikh Mujib turned into Bangabandhu, providing hopes and aspirations to his people who had been subjugated by the tyranny, oppression, and occupation of colonial and neo-colonial rulers for centuries.

His transformational leadership was more of an art than science. As B.M. Bass (‘From transactional to transformational leadership: Learning to share the vision”, Organisational Dynamics, 18, p 19-31) stipulates, when a leader fosters an environment of trust, his followers undergo a transformation of their personal values to support the vision and goals of the organisation. Bangabandhu too became a symbol of such a brand of leadership. He became a role model to his followers for his compassion for them and his insistence on empowering them by delegating responsibilities.

Both leaders and followers were able to forge a compact to share their successes and sacrifices. Simultaneously, he was able to create charismatic influence, inspirational motivation, and intellectual stimulation among his followers to forge a kind of unity that cemented the concept of community-Aesthetic leadershipbased nationhood. In the process, his style of leadership developed an aesthetic quality. Just like paintings, music and writing, his leadership demonstrated artistic expressions of beauty and happiness. Whatever gives people joy, as well as a signal to rise above self-interest, hovers around the domain of aesthetics. According to Rabindranath Tagore, art highlights whatever is beautiful around us. Artists separate and strain the beauty from reality (Chinnapatrabali (Letters by Tagore), Letter-131). If we consider it the basis of aestheticism, Bangabandhu surely was an artist par excellence: a poet of politics, the prime narrator of his time, a living legend. His aesthetic leadership postures manifested in the gestures of his hands and his index finger, his poetic yet thunderous words, amiable behaviour, and most importantly the timeless speeches that came from his heart. His speech on 7th March 1971 manifested the highest order of artistic expression. All the anger, sorrow, happiness, pain, shame, obstinacy, ego, restraint, resistance, and determination of the Bengalis as a nation resonated like an orchestra in his thundering voice that day. Naturally, UNESCO has recognised this speech as part of the world’s documentary heritage.

Bangabandhu’s entire life was a revelation of aestheticism. There was an artistic touch in his way of walking, behaviour, clothes, personality, communication, and relationships with others. He was instinctively artistic. Distinct. Not surprisingly, Loren Jenkins had called Bangabandhu the ‘Poet of Politics’ in his article in Newsweek following the speech of 7th March in 1971.

Artists bring politics into their art and Bangabandhu brought art into his politics. What were Mujib’s multidimensional qualities of aesthetic personality and charismatic leadership? To know more about his leadership qualities, we interviewed a select group of intellectuals and artists who were very close to Bangabandhu. They too have been doyens in their own fields.

Distinguished playwright Syed Hasan Imam knew Bangabandhu since he was fifteen years old. According to him, “Bangabandhu symbolised all our thoughts and hopes. I don’t think anyone had ever shown affection to Gandhi ji, Lenin or Marx by touching their cheeks. But during the famine in ’74, we collected some money to give the same to Bangabandhu. We took with us this poor lady but amazing actress called ‘Rahima Khala (auntie)’ to hand over the money to him. Bangabandhu received the money and Rahima Khala touched his cheeks and said, ‘May Allah give you a long life.’ I don’t think any other leader has received this kind of love and affection. The primary trait of Bangabandhu’s leadership was that he could always be one with his people. He had no pretension. He was just like one of us. He left many such examples. Humanity played an important role in his leadership. Another thing that was unique to him was his indomitable courage. He was never afraid of death.”

Eminent journalist Abdul Gaffar Chowdhury was simply adored by Bangabandhu. He has written many essays, articles, and memoirs about Bangabandhu. While speaking on Sheikh Mujib’s aesthetics, he quoted British columnist Cyril Dunne and said, “He was such a leader who could mesmerise the people with his thunder-like voice. It was not just his voice; he even had a massive figure. He was a true Bengali by race, language, behaviour, and figure. He was also very amicable. He was not rude even to his enemies. He treated them like a friend. This was a great quality of his leadership.”

We have lost many dear ones during the times of Covid-19. National Professor Anisuzzaman, Dr. Shamsuzzaman Khan and Mr. Kamal Lohani have fallen victims to Covid-19. We had also interviewed them about Bangabandhu’s aesthetic qualities around the end of 2019. I remember meeting Professor Anisuzzaman in his Gulshan residence on a winter morning. I can vividly remember him sitting wrapped in a shawl. When Professor Anisuzzaman was speaking about his favourite personality it felt almost dreamlike. It seemed as if the senior professor had come out from the pages of a novel to speak about a hero of his time. Professor Anisuzzaman said that Bangabandhu loved listening to songs written by Nazrul Islam and Rabindranath Tagore. He would hum their songs and use the lyrics in his speeches. He was especially enchanted by legendary folk artist Abbas Uddin’s songs. Bangabandhu wrote in his autobiography that Abbas Uddin’s songs were like the image that came to mind when the wind blew over a river. In his ‘Unfinished Memoirs’, Bangabandhu also wrote about his Delhi and Agra visit and the architecture there that mesmerised him. He also described his fascination in detail. We can surely understand from his description that he had a deep sense of aesthetics. He noticed not only the practical side of the structures but also their beauty. He used his aesthetic sense in all fields of his life. Since he was a politician, aestheticism found its way into his leadership as well.

Eminent journalist, cultural personality and socialist intellectual Kamal Lohani spent three and a half months in prison with Sheikh Mujib in 1962. Mr. Lohani was full of life. He was youthful even after growing old. His voice and memories were still crisp. Speaking about Sheikh Mujib made him even more youthful. He told us many things about Bangabandhu’s leadership, aesthetics, and overall personality. While describing his aesthetic leadership, Kamal Lohani said, “First of all, Bangabandhu Sheikh Mujibur Rahman was himself an aesthetic character and a kind of aesthetic was also noticeable in his physical appearance and clothing. The Bengali heritage was hundred percent there in him and he also had many humane sides to him. Since his childhood, Bangabandhu had a friendly personality. Politically he was a very acceptable figure. By acceptable, I mean that he was accepted by the masses. The reason for this was that his speeches and promises were not empty words. This mesmerised the people immensely. If we look at it from the aspect of language, we see that he used very simple words. This allowed him to reach the people faster. We can call this another aesthetic side of his. If we consider it objectively, he was especially drawn to Bengali culture, literature, poetry, and plays. Many may think why was Sheikh Mujib interested in film while being a political figure? He had established the Film Development Corporation when the industry was still in infancy in East Bengal. He would ask, “Why can’t Bengalis make films?” After Mujib’s intervention, people started to think of films as an art for the masses. He supported the film industry. The support he gave to artist Zainul Abedin during the establishment of Sonargaon Folk Museum also showed a brighter side of his consciousness and it was only possible because of his aesthetic sense. Very few political leaders in the world were seen to have integrated politics and culture like this.”

A few days ago, we lost folklore expert Dr. Shamsuzzaman Khan. We interviewed him around the end of 2019. He would sit beside Pathak Shamabesh Kendra sometimes. I can still remember that afternoon clearly, how passionate Dr. Khan was about Bangabandhu. He was, of course, deeply involved in research on Bangabandhu. While speaking about Bangabandhu Dr. Shamsuzzaman Khan said, “I first saw Bangabandhu in 1956. He was going towards Chawk Bazar from Sadarghat leading a hunger march. I saw him for the second time again in 1956. He was then a Minister. When Sheikh Mujib first came to the party office after becoming the Minister I was standing near the Mullik Brothers at Sadarghat that day. He got off from the ministerial car there. There were hawker stores on the road. A crowd was formed at Bangabandhu’s arrival. He got off the car and started to walk from there. The police hurried over and created a security barricade for him. He raised his hand and said, ‘Move away, I do not need security.’ He walked towards the office with many people following him. He wore a pure white Sherwani on that day. The tall and handsome man looked very fascinating. It felt like if a person isn’t like this, he isn’t suited to be a leader.” I could only share the words of a few of the intellects on aesthetic Bangabandhu in this limited space. I have in store many more interviews which I hope to use in my forthcoming book on this topic.

The book will talk more in-depth about Sheikh Mujib’s contributions to and love for art and literature. That Bangabandhu was enmeshed in the cultural personality of the emerging Bengali nationalism was clearly visible in his speech on February 15, 1971 at the Bangla Academy. He said, “The language movement of 1952 was not only for the language, but it was also deeply connected with the aspirations of Bengalis for the economic, social and cultural emancipation… The language can flourish in a free environment. One cannot bring any change to a language sitting in a room. It is like a meandering river that finds its way all by itself… I will urge the intellects to boldly come forward to create literature based on the struggles for the rights of the deprived. None will have the guts to obstruct you in this endeavour of yours… Our slogan ‘Joy Bangla’ embodies the urge of political, economic and cultural freedom of our people.” (Hossain, Selina (editor), ‘Bangabandhu Niyey Golpo’(‘The short stories on Bangabandhu’), Sadar Publication, 2021, p. 10).

These few words vividly demonstrate his commitment to art and culture in addition to his political aspirations.