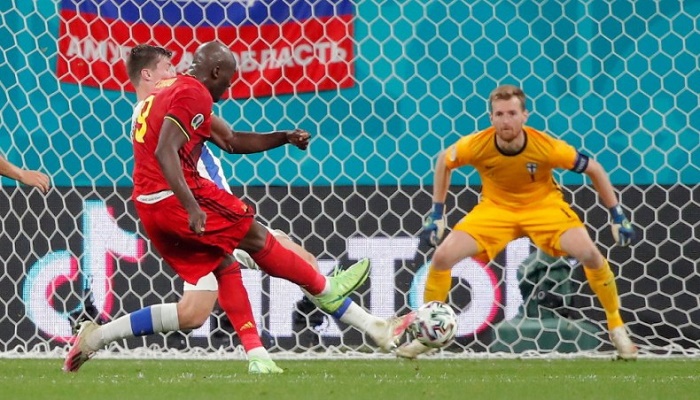 Belgium scored two late goals to see off a valiant Finland 2-0 on Monday, pushing their opponents to the brink of a group-stage exit from Euro 2020 and sending Denmark through to the last 16.

The world's number-one-ranked side will face a third-placed team in the next round on Sunday in Seville.

Finland finish third in the group, but appear unlikely to be one of the four best third-placed teams.

"They inspired us. We could not achieve our goal of taking at least one point. We are obviously disappointed. I am proud of my team."

The other game saw Denmark thrash Russia 4-1 in Copenhagen to snatch second place and book a ticket to the last 16.

Finland knew they would only need a point to go through if the Danes won, but despite holding off Belgium for more than 70 minutes, they couldn't keep it up in the Saint Petersburg heat.

"There were no spaces, it was a little bit difficult," De Bruyne said.

This was arguably the strongest XI Belgium have fielded in the tournament so far, with captain Eden Hazard, De Bruyne and Axel Witsel all starting after recent struggles with injury.

They did not take long to find their stride, with De Bruyne releasing Lukaku, who fired wide, before seeing a low cross hacked away by a panicking Finland defence.

The first half was largely played at a slow pace, but Belgium always looked dangerous when they moved the ball more quickly, with two such moves ending in Witsel and Hazard blasting over the crossbar.

The Red Devils showed what they are capable of shortly before half-time with a wonderful counter-attack led by Hazard, but Hradecky denied teenager Jeremy Doku with a diving, one-handed save.

Hazard tried to win a penalty by falling near Finland defender Daniel O'Shaughnessy, but his appeals for a spot-kick were waved away.

Finland showed a little more adventure at the start of the second half, which left them more open at the back.

Hradecky pulled off a magnificent save to deny Hazard, but was beaten by Lukaku in the 65th minute.

However, the goal was ruled out by VAR for the tightest of offside decisions.

But Finland did fall behind, in agonising circumstances, as Thomas Vermaelen's header from a corner struck the post and crossbar before being nudged over his own line by Hradecky.

The underdogs had no choice but to chase an equaliser if they wanted to finish second in the group, but they were caught out again nine minutes from time.

De Bruyne's clever pass into the area found Lukaku, who turned and slammed home a right-footed shot to score his 63rd international goal.

Finland now face a nervy wait to see if they have done enough, but would need a remarkable run of results to progress.