The Supper at Emmaus: A coded symbol hidden in a masterpiece 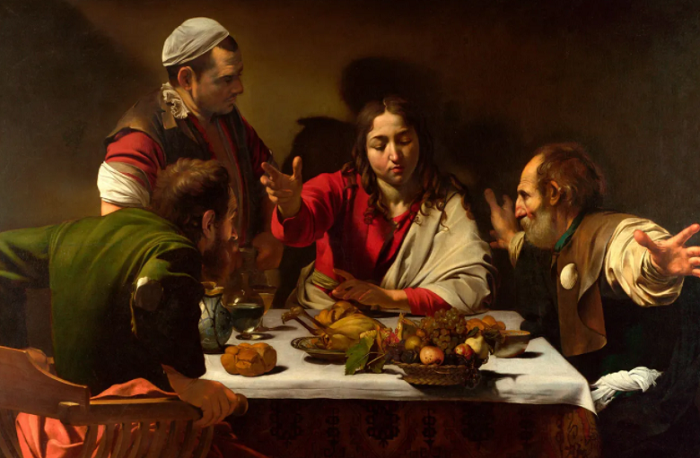 Sometimes a flaw isn't a flaw at all but a flourish – a stroke of genius. Take, for example, the tiny fray in the weave of the wicker basket that teeters on the edge of the table at the centre of Michelangelo Merisi da Caravaggio's early 17th-Century masterpiece The Supper at Emmaus, among the greatest treasures in the rich collection of the UK's National Gallery.

Though countless eyes have marvelled at the mysterious drama unfolding in the shadowy interior of the inn in which the recently resurrected Christ has just revealed his true identity to a pair of dumbstruck disciples, the significance of an almost imperceptible imperfection has gone unnoticed in the four centuries since the painting was commissioned by the Italian nobleman Ciriaco Mattei in 1601. A loose twig, sticking out from the plait of the woven fruit bowl, is a dainty defect from which the work's truest meaning can be unravelled.

Alone among the countless symbols that punctuate the religious painting, this delicately described detail  half in shade, half in light – transforms Caravaggio's celebrated canvas from a mere illustration of scripture scene into something active and daring – a spiritual challenge whose stakes could not be higher.

To appreciate the full implications of this easily overlooked detail, it is worth reminding ourselves of the contours of the bigger picture Caravaggio is conjuring. The source for The Supper at Emmaus – a subject that has inspired everyone from Rembrandt to Velasquez, Pontormo to Cavarozzi – is the New Testament's Gospel of Luke, which tells the story of Christ's intimate repast with two of his disciples, Luke and Cleopas, who have failed to recognise him after his return from the dead. As the bread has already been broken and blessed, the time has come, according to the gospel's account, for Christ to "open" the eyes of his followers and for him to vanish "out of their sight".

The painting, in other words, captures a mystical threshold, the millisecond before Christ, who is hauntingly haloed by a stranger's shadow on the wall behind him, disappears from the world. In that immeasurable instant between revelation and evaporation, Caravaggio hatches a suspended, otherworldly world. To the left of the basket, Christ's paternal uncle, Cleopas, pushes himself up from his chair in panicked astonishment at the disclosure – his sharp elbows poking through the worn-out sleeves of his coat.

On the other side of the wicker bowl, to our right, Luke flings his arms out wide, mirroring the very posture on the cross into which Christ's own limbs had been nailed at the time of his painful death. Meanwhile, the unfazed innkeeper, who stands beside Christ, gazes on uncomprehendingly – hearing the same words that Christ has uttered to his thunderstruck disciples, but unable to grasp their significance.