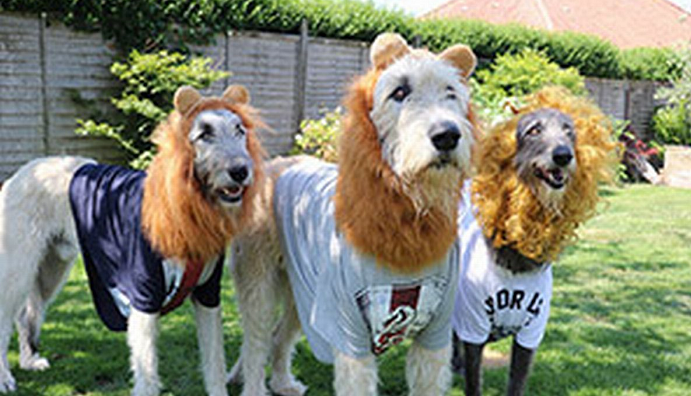 A football-loving dog owner has got into the spirit of the Euros football tournament by dressing her large dogs up as three lions in support of the England team.

Irish wolfhounds Arthur and Elliot, and Scottish deerhound Grace, looked patriotic as they posed in their England football gear in their garden in Kesgrave, Suffolk.

And whilst 61-year-old Julie and her husband Tony, 57, were left disappointed by the England vs Scotland match last Friday, they plan to dress the dogs up again ahead of England's game against the Czech Republic tomorrow.

Julie joked: "The dogs looked very patriotic in their England gear, which we put on them just before the England vs Scotland match.
"They're very gentle and sweet dogs - and as long as there is a sausage just out of shot, they're willing to put up with us dressing them up.

"The match against Scotland turned out to be quite underwhelming.

"One of my dogs likes a kickabout in the garden, and at one point I thought he could have done better, and I joked that we should send him on as a sub.

"Hopefully it'll be a bit more exciting tomorrow. We'll definitely dress the dogs up again for the next match.

"I'm even thinking about taking them down to the statue of Sir Bobby Robson in Ipswich and seeing if I can get a photo of them in front of that."