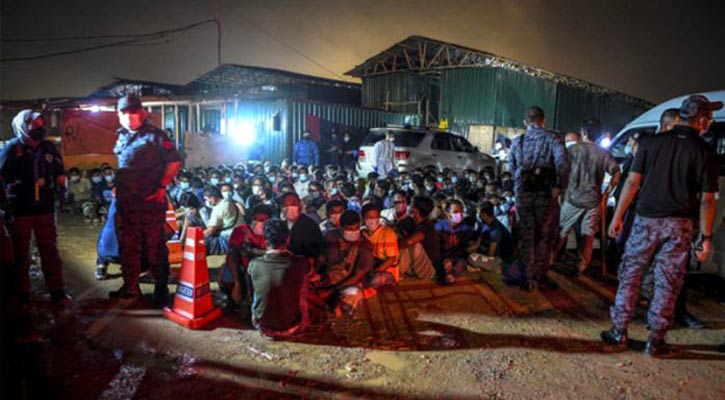 Malaysia's Immigration Department detained 309 immigrants, including 102 Bangladeshis, during an integrated operation at an illegal settlement in Dengkil city on Monday morning.

Immigration director-general Datuk Khairul Dzaimee Daud said his department had received information from members of the public who claimed that there were individuals at the settlement who were believed to have violated the standard operating procedures (SOPs) of the Movement Control Order (MCO).

He said, as a result, the department had raided the area and found that they did not comply with the MCO SOPs as prescribed.

“I arrived with the operations team and found that their settlement was so dense, dirty and did not have a proper drainage system, apart from having a place to gather and eat in large numbers.

“They also admitted that they lived in a group in one room, which is about four to seven people,” he told reporters at the scene.

Khairul Dzaimee said this showed that they were free to do anything at the construction site without any compliance with the MCO SOPs.

He said this was the main purpose of the Home Ministry which directed the Immigration Department to help reduce positive cases of the COVID-19 outbreak at the workplace comprising immigrants.

He also explained how Indonesian women sneaked into the country, by having their husbands entering Malaysia to work first and then these women would follow their spouses using social visit pass.

“Indonesian women enter Malaysia using a social visit pass and continue to reside in the country beyond the stipulated time. In addition, they will live with their husbands who work illegally in the country.

“All these illegal immigrants will undergo the COVID-19 screening test today to be carried out by the Putrajaya and Seremban district health offices,” he said.

Khairul Dzaimee said after the screening test, these immigrants would be placed at the Semenyih Immigration Depot to be detained and investigated in accordance with Section 6 (1) (c) of the Immigration Act 1959/63 and Section 15 (1) (c) of the same law, before deportation.

During the operation, the Immigration Department also inspected 10 Rohingya refugees who are United Nations High Commissioner for Refugees (UNHCR) cardholders.

“Out of 10 UNCHR cardholders, only two of them were arrested for possessing fake UNCHR cards while the others were released,” he said.

This integrated operation which started at 12.30 am until 2.30 am was joined by 189 personnel from various enforcement agencies including the General Operations Force, National Registration Department, Labour Department and the Civil Defence Force.