China's Nuclear Arsenal Could Kill Millions of Americans In Minutes 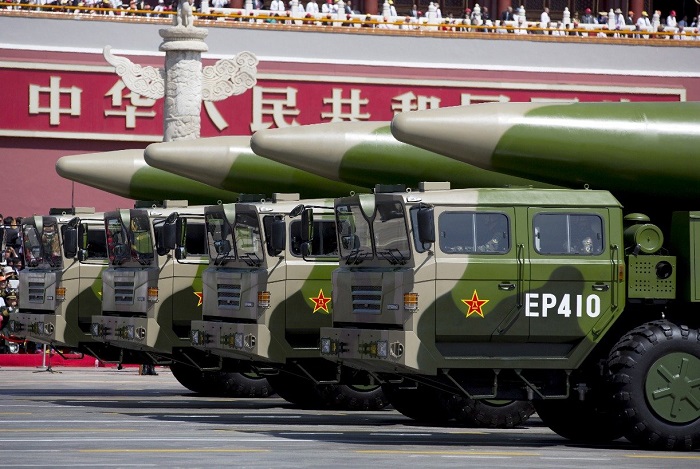 There is ample reason for anxiety with many new Chinese nuclear systems now coming online, as well as a substantial reason for optimism.

American strategists need to keep this Chinese restraint in mind, especially as they weigh both new, expensive weapons systems (missile defense augmentation, the new strategic bomber, SSBN-X and also prompt global strike) and a set of measures to counter Beijing within the maritime disputes on its flanks.

When one reads enough Chinese naval literature, diagrams of multi-axial cruise missile saturation attacks against aircraft carrier groups may begin to seem normal. However, one particular graphic from the October 2015 issue (p. 32) of the naval journal Naval & Merchant Ships stands out as both unusual and singularly disturbing. It purports to map the impact of a Chinese intercontinental ballistic missile (ICBM) strike by twenty nuclear-armed rockets against the United States.

Targets include the biggest cities on the East and West Coasts, as well as in the Midwest, as one would expect. Giant radiation plumes cover much of the country and the estimate in the caption holds that the strike “would yield perhaps 50 million people killed” The map below that graphic on the same page illustrates the optimal aim point for a hit on New York City with a “blast wave” that vaporizes all of Manhattan and well beyond.

That makes the North Korean “threat” look fairly insignificant by comparison, doesn’t it?

But what’s really disturbing is that the scenario described above envisions a strike by China’s largely antiquated DF-5 first generation ICBM. In other words, the illustration is perhaps a decade or more out of date. As China has deployed first the road-mobile DF-31, then DF-31A and now JL-2 (a submarine-launched nuclear weapon), China’s nuclear strategy has moved from “assured retaliation” to what one may term “completely assured retaliation.”

Indeed, the actual theme of the article featuring those graphics concerns recent reports regarding testing of the DF-41 mobile ICBM. The author of that article, who is careful to note that his views do not represent those of the publication, observes that when a Chinese Defense Ministry spokesperson was queried about the test on August 6, 2015, the spokesperson “did not deny that the DF-41 exists”

The author also cites U.S. intelligence reports, concluding that four tests have now been conducted, including one that demonstrates multiple-reentry vehicle (MIRV) technology. The author estimates that DF-41 will finally provide China with the capability to launch missiles from north central China and hit all targets in the U.S. (except Florida). With the goal of better understanding the rapidly evolving strategic nuclear balance between China and the U.S. and its significance, this Dragon Eye surveys some recent Mandarin-language writings on the subject of Chinese nuclear forces.

To be sure, a flurry of Chinese writings on the nuclear balance did follow after the September parade in Beijing that highlighted Chinese missile forces. Perhaps the most remarkable revelation from the parade was the unveiling of the DF-26, a new, longer-range anti-ship ballistic missile (ASBM), based on the revolutionary shorter-ranged cousin, the DF-21D ASBM. In fact, the November 2015 issue of the aforementioned journal ran a series of articles on the DF-26. In those articles, the weapon is described multiple times as a “nuclear conventional dual-purpose” weapon. The major thrust of the article in that issue on the impact of the DF-26 on nuclear strategy seems to be to try to debunk the argument that China’s deployment of this new type of missile is “destabilizing.” Like their American counterparts, Chinese strategists seem to be increasingly practiced (at least in a domestic context) at selling the argument that more and new types of weapons enhance deterrence and thus strategic stability.

Despite the developments related above, the balance of opinion in Beijing seems impressively moderate on the prospects for a major nuclear buildup by China. In the allegedly nationalist forum of Global Times one commentator from the China Institute for International Studies (associated with the Foreign Ministry), for example, offered a few illuminating comments about a year ago in an expert forum entitled “How Many Nuclear Warheads Are Enough for China?” He is evidently concerned that “We have heard some new voices calling to ‘build a nuclear force appropriate for a great power.’” Instead, he argues that China must continue to focus on building a “small, elite and effective nuclear forces” Likewise, a former vice-director of the Chinese Navy Nuclear Security Bureau offers that China is a medium-sized nuclear power, which should learn from the experience of Britain and France and deploy no fewer than four submarines carrying nuclear weapons (SSBNs)—far fewer than operated by either Russia or the United States.

Yet one can still find in that same analysis ample concern among Chinese specialists regarding new directions in U.S. military capabilities that could threaten China’s deterrent. Another concern amply evident in Chinese writings concerns tactical nuclear weaponry. Most of this reporting of late concerns a recent upgrade to the American B-61 nuclear bomb. A full-page graphic in the same issue that discusses the DF-41 missile tests offers many specifics on the B-61, including its “dial-a-yield” feature that enables the operator to choose destruction on a scale ranging from fifty to 0.3 kilotons. That same month, in the magazine Aerospace Knowledge a “centerfold” featured the SS-26 Iskander, a Russian short-range tactical nuclear weapon.

Elsewhere, I have, moreover, documented Chinese discussions of tactical nuclear weapons for anti-submarine warfare, as well as the importance of nuclear-tipped submarine-launched cruise missile (SLCMs) for strategy in the late Cold War. Let’s hope that these are just academic discussions in the Chinese context and do not reflect actual weapons under development.

As one can see from this discussion, there is ample reason for anxiety with many new Chinese nuclear systems now coming online, as well as a substantial reason for optimism. As an author who frequently rides China’s high-speed rail I am acutely aware that astronomical sums of money spent on that system could just as easily have been spent building an enormous arsenal of nuclear weaponry. That was not done and it’s certainly good that Chinese leaders have their priorities straight. American strategists need to keep this Chinese restraint in mind, especially as they weigh both new, expensive weapons systems (missile defense augmentation, the new strategic bomber, SSBN-X and also prompt global strike) and a set of measures to counter Beijing within the maritime disputes on its flanks.