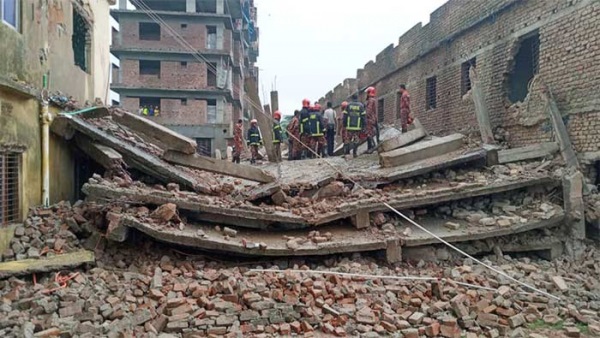 An under-construction building collapsed at Koyerdar in Rajshahi city on Sunday afternoon.

No casualty was reported in the incident, but three private cars were damaged.

Some local people said that four floors of the fifth-storey building were completed.

The owner of the building was businessman Akhtaruzzaman who died one year ago. After his death, construction work remained off. At about 3:00pm, the building collapsed, sources said.

Abdur Rouf, senior station officer of Rajshahi Sadar Fire Service and Civil Defence, said that the building collapsed completely.  No casualty happened as none lived in the building.

But three private cars and some rickshaw vans, which were kept under the building, were damaged, he said.

But Tofazzal, caretaker of the building, said that standard materials were used to construct the building.

Permission was taken from Rajshahi Unnayan Kartripakkha to build it, he added.