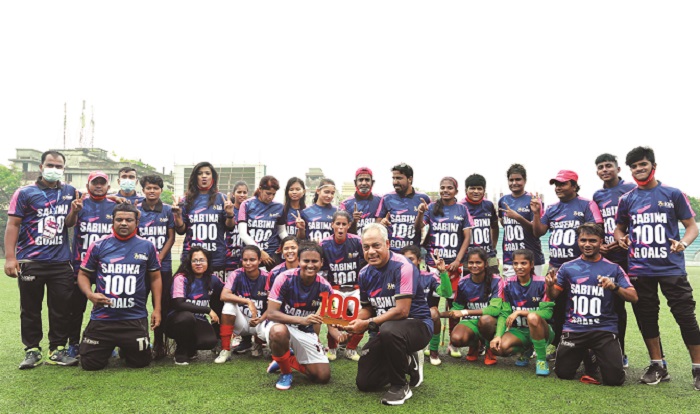 Bashundhara Kings captain Sabina Khatun has become the first female footballer of Bangladesh to set a new milestone of 100 goals in the women’s domestic league at the Birshrestha Shaheed Sepoy Mohammad Kamal Stadium in Kamalapur in the capital on Sunday.

The national women’s football team forward of Kings celebrated her feat with a hat-trick during their first match of the ongoing Women’s Football League second-leg against bottom-placed Saddapuskuruni Jubo Sporting Club.

Kings beat Saddapuskuruni by 5-0 goals. However, Sabina completed the hat-trick scoring three goals in the 20th, 31st and 78th minutes that took her tally to 101 in her club career. Defender Akhi Khatun and midfielder Maria Manda added two in the 66th and 68th minutes.

“There were a lot of challenges at the beginning of my career. When I became the best footballer in SAFF Women's Championship in 2010 in Cox's Bazar, I decided to stay with football and to do something,” Sabina told media after the day’s match.

Sabina scored a total of 298 goals in her 12-year career including 19 international goals and 279 goals in her club career.

“I would like to thank my club (Kings) for everything. I would also like to thank Imrul Sir (BFF vice-president and Kings president) for his pragmatic planning and management. When I reached the 250-goal milestone, they honoured me,” Sabina added, who was presented with a bouquet of flowers and a crest by Kings.

Last season, Sabina was adjudged the top scorer as she scored 35 goals with the highest number of eight hat-tricks in the competition.

The striker from Satkhira played for Sethu FC in the Indian women’s league in 2018, for the Maldives National Defence Force in the Maldivian futsal tournament in 2015. Due to her contribution to women’s empowerment, she was awarded by Ananya Top Ten Awards in 2016.

The day’s other match between Kachijhuli Sporting Club and Nasrin Sports Academy was abandoned as Kachijhuli SC failed to submit the COVID-19 test reports to the federation before the match. BFF disciplinary committee will take the further decision.