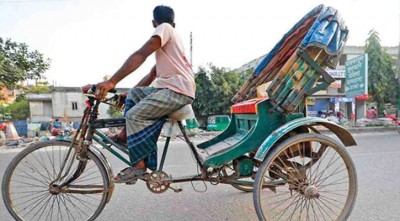 Home Minister Asaduzzaman Khan Kamal said on Sunday that a decision has been taken to ban motorised rickshaws and vans across the country.

“A decision has been taken to ban motorised rickshaws and vans. Plying of easy-bikes are being controlled which will be stopped gradually,” he said.

The minister came up with the information at the Secretariat after emerging from a meeting of the taskforce constituted to implement the recommendation for bringing discipline and controlling accidents on roads.

Mentioning some of 111 recommendations to bring discipline on roads have already implemented, the minister said that they have been made a course of action to implement the rest of the recommendations.

“Rickshaws and vans are plying on the roads by installing motors. Those vehicles have brakes on front wheels, but no brake, on rear wheel or even if there are, those are inadequate. When they brake, their vehicles often overturn,” he said.

Kamal further said that pedal rickshaws will remain out of purview of the ban.

“Even those vehicles also ply on the highways. That’s why we have taken a decision to stop those converted vehicles,” he said.

Replying to a question on stopping other slow-running vehicles, Kamal said Nasiman, Kariman and other slow-pace vehicles are being plied on the roads as there are no alternatives to the vehicles.

“We will take a decision whether it is possible to stop such vehicles or not,” he said.

Kamal noted that there are not enough vehicles in the rural areas except bicycles, motorcycles and rickshaws.