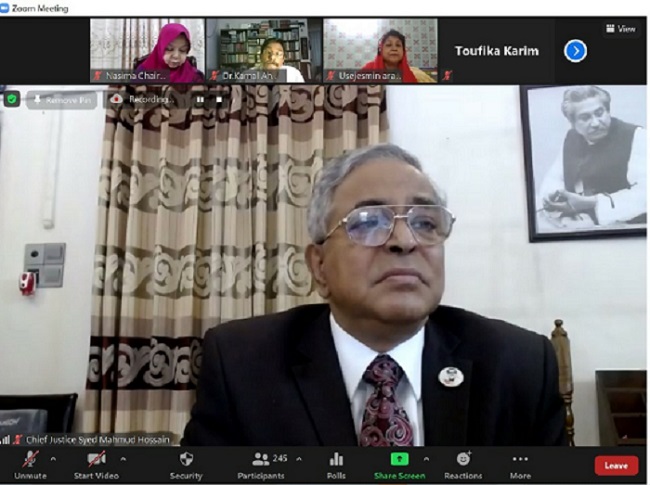 Chief Justice Syed Mahmud Hossain has ordered quick disposal of the cases filed over rape and persecution of women and children.

“Rape is a detestable offence. An accused can be punished mere only basis of the statements of the victim woman or child. So, the concerned tribunals will have to expedite settlement of these cases,” he said.

He made the directive addressing as the chief guest at a virtual discussion organised by National Inquiry Committee of National Human Rights Commission (NHRC). Commission Chairman Nasima Begum presided over the meeting which aimed at recommending measures to resist rape and other violence committed against women and children.

Syed Mahmud Hossain asked the judges of the women and children tribunals not be influenced by any quarter in doing professional duties.

“We are working sincerely to get rid of the culture of impunity and delayed dispensation of justice. If necessary, victims have to be compensated. We need to make sure that criminals are not going unpunished and innocent harassed,” he said.

NHRC Chairman Nasima Begum underscored need for accelerating the process of executing punishment to the convicts.

“We saw quick dispensation of verdict on the case filed over rape and murder of Nusrat. It was commendable job on the part of the court. Unfortunately, the verdict is yet to be executed. Timely execution of verdict is needed to check the heinous offence,” she said.

She also criticised decision of a court which encouraged marriage between the rapist and victim.

NHRC member Jesmin Ara Begum, also former district and sessions judge and convenor of the inquiry committee, placed some recommendations to the judges. The judicial officials also pointed out some obstacles and suggestions to overcome the challenges.

This for the first time that NHRC has formed an inquiry committee entrusted with placing recommendations to be submitted to the government to contain violence against women and children.